On Friday morning, Liberty University President Jerry Falwell was interviewed on Fox News’ Fox & Friends in a segment about college campuses canceling classes due to COVID-19 (Coronavirus). He also addressed the student body via a taped interview shown in Convocation.

Fox News reported that over 100 colleges have canceled in-person classes and many are moving their classes online, a format Liberty has perfected as a pioneer in online education.

“We have 100,000 students studying online, only 15,000 on campus, so the majority of our student body is already off campus,” Falwell said in the live interview from a studio on Liberty’s campus. “But the 15,000 who are here, many of them have asked us, ‘Please do not cancel classes, don’t send us home to do online; we love it here, we want to stay.’ What we have done is eliminated any events that involve large crowds.”

As of Friday morning, Liberty was operating on a “normal” status, with students on Spring Break next week and returning for classes resuming March 23. (Visit Liberty’s COVID-19 Advisory website for updates.)

“We have talked to numerous medical professionals before we made this decision,” Falwell said. “Eliminating the large gatherings we think is a prudent move. In 1918, when the Spanish influenza came to America, cities that banned large crowds had much, much less spread than cities that didn’t, so we learned from that (history). We’re on Spring Break next week, so it’s all fluid — anything can change — but as of right now, that’s our plan.”

Students viewed Friday’s Convocation, usually held in a 10,000-seat arena, in small groups via livestream on their electronic devices.

David Nasser, Liberty’s senior vice president for spiritual development, opened Convocation with a pre-taped segment with Falwell before speaking live with Head Men’s Basketball Coach Ritchie McKay, whose team was headed to the NCAA Tournament for the second year in a row.

“In one sense, I know this in due time will feel like an inconvenience for a lot of us, in that games are canceled, travel plans were erased, but for a lot of other people, this is a very serious matter,” Nasser said. “This will cause them to lose their jobs, some will be having memorial services for loved ones, so we want to be sensitive to that, especially as believers who see all of this through an eternal lens. We know that God in His sovereignty is going to give us an opportunity through so much of this tragedy to create testimony.”

In the video, Falwell spoke about the university’s decision to remain open after Spring Break and urged students when they go home, to not spend time around people who are high-risk.

Falwell reiterated what he told Fox & Friends, that most large events will be canceled (the remainder of Convocations will be live-streamed).

“We’re hopeful that it’s overhyped and it’s not as bad as everyone wants to think it is; we’re praying that’s the case.”

He said the university is working with students who have been affected by canceled trips.

“Some of them were academic requirements, and we’re working with the provost to make sure that everybody still graduates on time and won’t be held up by that,” he said.

He told the students that he and his wife Becki had received scores of messages from students urging them to keep the school open. But he said the university is doing what it can by limiting large gatherings.

“You guys paid to be here, paid to be here on campus, and I want to give you what you paid for, but we do have to be sensitive to people with respiratory problems and older people.”

He said Commencement is scheduled as planned: “It will be outdoors, which is even better, and it’s something we’re not going to deny our graduates who have worked so hard to reach that milestone.”

Liberty University Convocation was held via Livestream from a studio on Liberty’s campus due to the university eliminating large gatherings because of the COVID-19 pandemic.

Because so many Spring Break trips have a service element, Nasser said the school has connected with local community organizations like Meals on Wheels to give students other opportunities to serve during the break (text LYHSERVE to 24502).

Nasser then congratulated McKay and his team for one of the best seasons in university history. The team won the ASUN Championship on Sunday in front of a packed Vines Center.

“The Vines Center was rocking last Sunday. It was really special for our basketball program to see that kind of support,” McKay said. “We had 7,700 people and it was our 23rd win in a row, and we got to close the Vines Center out well with an undefeated season at home. It was the hard work and labor of many but, especially our seniors, some of them have been here for five years.”

McKay said the NCAA’s decision on Thursday to cancel March Madness was hard to bear, especially because his team had invested so much into the program for a whole year since the Flames’ first-ever victory in the NCAA Tournament last year.

But he said the team has shown great character through this, which he is most proud of.

“The beauty in this is that we have young men who represent our university in such a first-class fashion — they really are a part of something bigger than themselves and that is Liberty University and a commitment to our mission,” he said. “They handled it with grace and continue to operate out of a deep sense of gratitude that I can only tell you were really proud of them for.”

He said his heart goes out to the spring sports as well (all ASUN events have been suspended until at least April 5; an update is expected this afternoon) and he gave the students a Christian perspective on the situation:

“We all get the chance to be something bigger than ourselves, especially as believers,” McKay said. “I think it’s really important that we display for others a sense of hope. I heard a great quote the other day that says, ‘The peace within will always be greater than the panic without.’ For those who know and trust Jesus as our Lord and Savior, we can trust what His Word says. I believe that the hope we can inflict on others will not only be in our words but in our actions. We get a chance and privilege of maybe making someone else’s lives better by praying for them or coming alongside them.”

Bestselling author and podcaster Jordan Lee Dooley delivered the main Convocation message, speaking on what it means to pursue meaning in life over happiness. 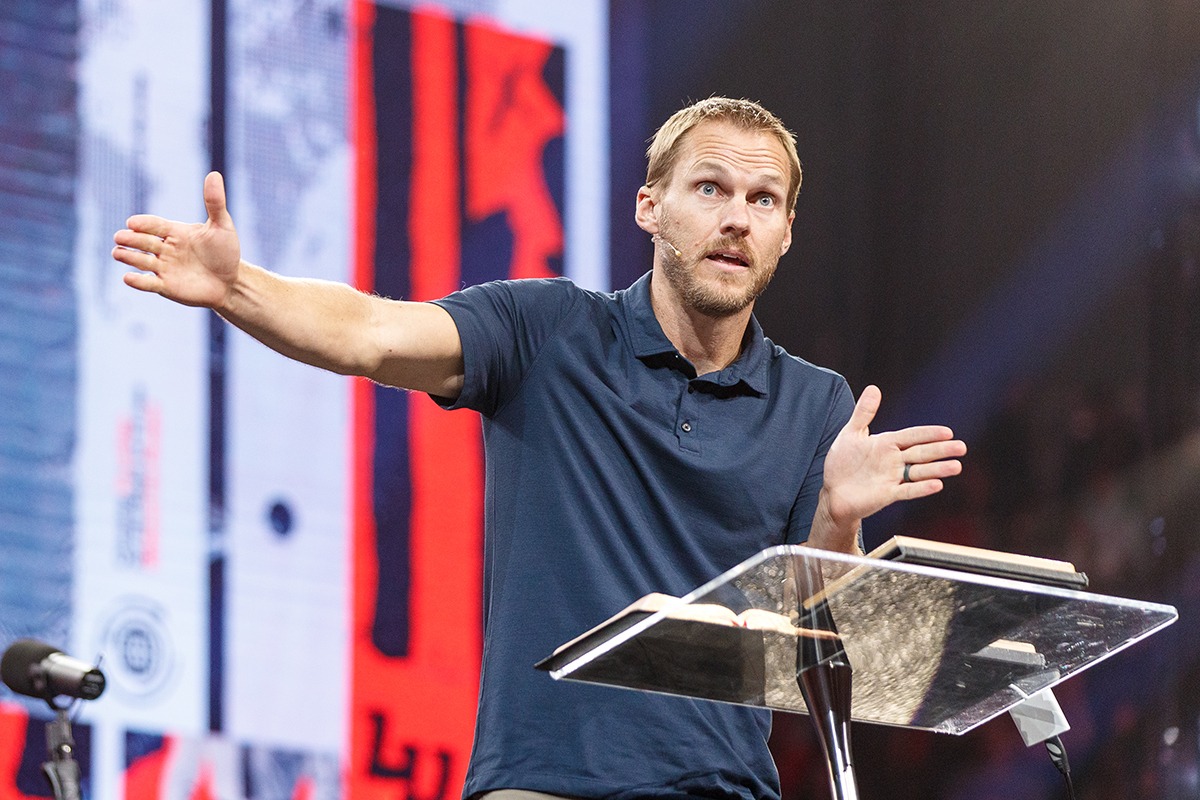 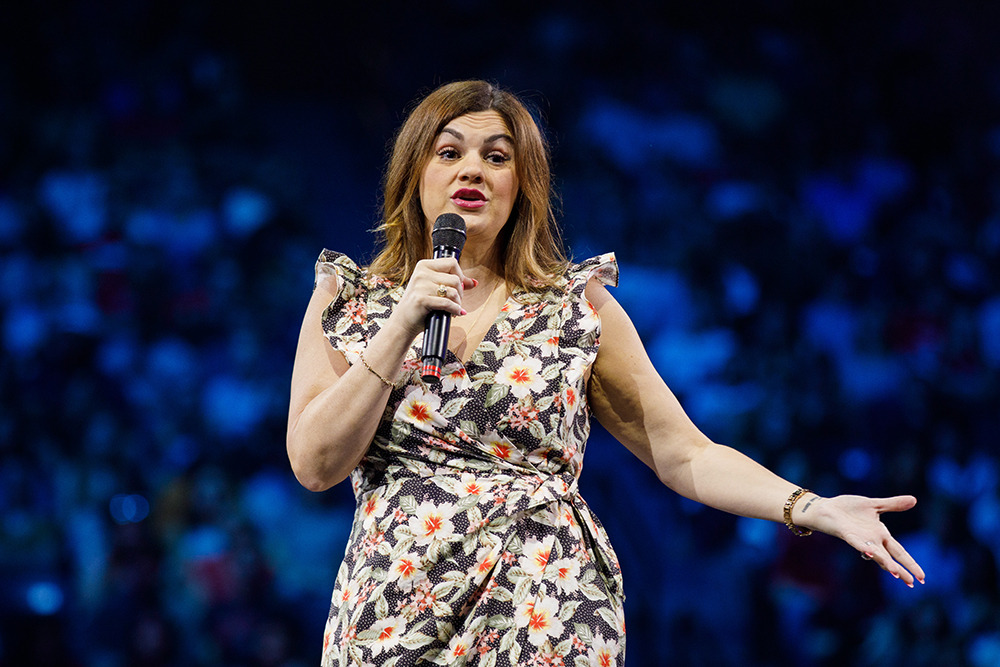