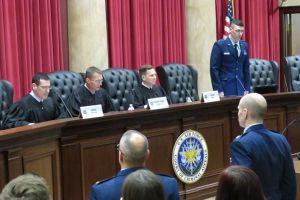 On Thursday, the Air Force Court of Criminal Appeals (AFCCA) heard a live case in the Liberty University School of Law Supreme Courtroom, which is modeled after the United States Supreme Court. The visit provided students a front-row seat to see how the AFCCA and other military courts operate.

This is the third court that has heard live oral arguments in the Law School’s Supreme Courtroom, following the 4th Circuit Court of Appeals in 2018 and the United States Court of Appeals for Veterans Claims in 2019. But the court appearance on Thursday was unique in that it offered a level of student interaction. For this case, the court asked two student groups to write amicus briefs — which offer the court relevant information to bolster a particular side and advocate for an outcome — in support of each side of the case being heard. After the attorneys made their arguments to the court, one student from each group was provided the opportunity to argue their brief in front of the live court.

“The Air Force Court really wanted to open it up for better participation from the students,” said David Western, Liberty Law’s associate dean for administration and student development. “They get to argue not just in a pretend moot court, but in a real court case. They get to experience the hard work that is necessary to participate in a live hearing.”

The case on appeal involved an airman who was convicted in the lower court of using drugs. His use was discovered after a military working dog was called to investigate a dormitory with a suspicious odor. While investigating the dorms, the military working dog alerted its handler to the detection of drug residue or odor, on the airman himself. Even though no drugs were found on the airman, nor his personal bag or his room, the military magistrate ordered a urinalysis, which later tested positive for cocaine. The court was asked to consider whether search of the airman’s urine was done without probable cause and thus a violation of the Fourth Amendment.

Western, who was instrumental in bringing the AFCCA to Liberty, said these events offer students an authentic and intriguing view of an appellate court.

“We do a lot of moot court trials where (students) build arguments from a set of facts that professors give them, but there’s no better way to learn what goes on in an appellate courtroom than actually witnessing an event,” he said.

The two students who presented arguments during the trial, Rebekah Meier and A.J. Colkitt, are in their third year in law school and serve as the chair and vice-chair for Liberty’s moot court program, respectively. Professor Scott Thompson, advisor to the moot court team, selected Meier to argue the government’s position and Colkitt to brief the appellant’s side.

“It’s pretty surreal, and I was extremely honored when I was asked to participate in this and ready to get started, because I love criminal procedure and this just fascinated me,” Colkitt said.

“In law school, a lot of what we do for extracurriculars is fake cases, where you have the experience but it’s not in front of a real court. So to have an opportunity like this while still in law school, to stand before the judges that are actually going to be deciding the case, I loved it,” Meier said.

Western noted that in addition to the court officials being present on campus, the Pentagon also sent an Air Force JAG recruiter. Students were able to speak with the recruiter and the trial participants and receive advice about a potential career as a judge advocate. 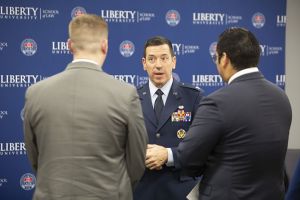 “It gives the opportunity for the recruiters to see how well our (student) advocates did, and not only does that help the students themselves who put on the briefs and arguments, but it also puts Liberty in a better position to demonstrate that these are the kind of students we are producing here,” Western said.

As a retired Air Force colonel who served as a judge advocate himself, Western is enthusiastic for students to possibly begin a career in the field he enjoyed. While Liberty Law has placed several alumni as JAGs across all branches of the military, it recently had its first student selected for the highly competitive JAG one-year college program, and another student received a direct appointment as well.

Liberty Law Dean B. Keith Faulkner emphasized the idea that an event like this allows students to transfer their theoretical knowledge of the law into a real case and, in essence, to bring the law to life.

“Watching attorneys argue on behalf of clients — live in front of our students before an actual court — is inspiring and reinforces to our students the significant role they will play in defending the Rule of Law upon graduation,” he said. “These types of events greatly enhance our innovative Lawyering Skills Program and provide added value to our students and larger community of learners.”