Students who were likely still adjusting to their new morning course schedules at Liberty University received a comfortable welcome at the Vines Center on Wednesday as 12,000 pillows filled the arena seats for the first Convocation of the school year. The pillows, collectively worth $600,000, came as a gift to all in attendance from the day’s speaker, MyPillow inventor and CEO Mike Lindell.

School of Business Dean Dave Brat introduced Lindell and presented him with an honorary Doctor of Business. Brat shared that Lindell’s immensely successful company employs 1,600 workers and has sold over 41 million pillows. However, the most honorable note about Lindell, Brat explained, is the way he openly shares the Gospel at every opportunity. He called Lindell “one of the greatest Christian businessmen on the planet.”

Liberty President Jerry Falwell also welcomed Lindell, who is a personal friend. “I can’t think of anybody else who epitomizes the principles that built this school than Mike,” he said. 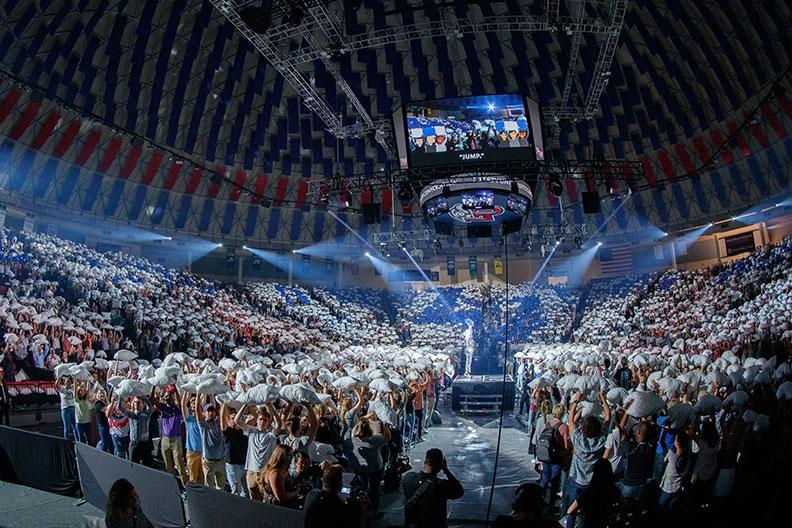 Lindell began his message by saying that he sees his success in the business world simply as an afforded opportunity to share his Christian faith.

“The pillow is just a platform for a much bigger thing,” Lindell said. “My calling is to speak out the word of Jesus.”

Lindell walked the students through his many past struggles, including decades of drug addiction and failures in the business sphere. He admitted that for many years after he founded MyPillow and wanted to use it to honor God, he was still mired in addiction. He recounted a night in 2008 when he had been awake for 14 days under the influence of crack cocaine and a drug dealer intervened by sitting down to talk and taking a photo of Lindell on his phone. 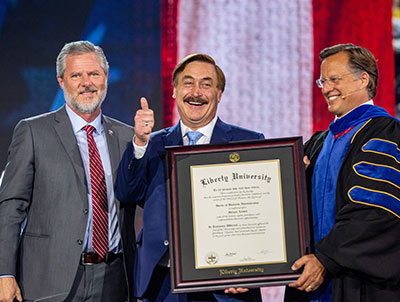 Lindell said the man told him, “You’ve been telling us for years that this pillow is a platform for God, so you’re going to come back someday and get us out of here, and we’re not going to let you die on us.”

Lindell reflected on that conversation. “I knew that if I woke up the way I was at that time the next day, my passion and calling was going to be gone,” he said.

That photo is now on the front of Lindell’s new book, “What Are the Odds? From Crack Addict…to CEO.”

What began in 2004 as a dream of a pillow has become a multi-million-dollar establishment, and in 2016 Lindell found himself in New York City for a meeting with Donald Trump, who was a presidential candidate at the time.

“Things started happening that never happen, and I knew they had to be God,” Lindell said. “When I met with Donald Trump, it felt like a divine appointment, and when I walked out of that office I decided I was going to go all in.” 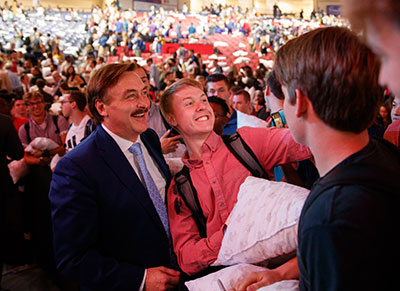 Lindell explained that public speaking has been a significant roadblock for much of his life, and it has only been recently that he has found himself able to speak to larger crowds. Wednesday was the first time that Lindell has told his life story in a forum as big as Convocation. He previously appeared on the Convocation stage last semester and gave an abbreviated version of his testimony with Senior Vice President of Spiritual Development David Nasser in an interview format.

In closing, Lindell said that every student has a calling and that they should follow the words of Proverbs 3:5-6, which says, “Trust in the Lord with all your heart and lean not on your own understanding; in all your ways submit to Him, and He will make your paths straight.”

“You guys here at Liberty are the hope of the nation, and right now you are on the right paths that I didn’t take back then,” Lindell said. 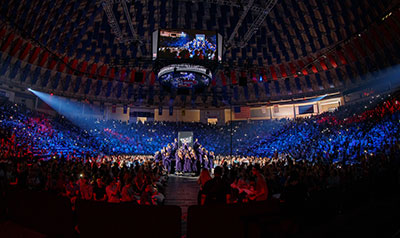 Prior to Lindell’s speech, Convocation began with a lively introduction by LU Praise and an interactive game involving the pillows that were given out. Nasser welcomed students back to campus and informed them of service projects students had participated in over the summer. Nasser also shared news of the death of 24-year-old student Sarah Brungard, who was killed in July after a tragic car accident, and he led a prayer for her family, who were in attendance.