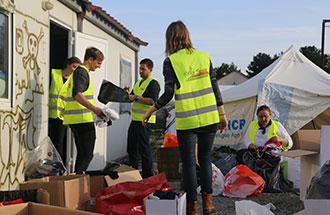 While in Greece, the team worked at a holding ground camp where Syrians, Afghans, Iraqis, and other refugees displaced by the Syrian civil war are trying to cross the Macedonian border in hopes of a better life. Civil war and conflict in the area have resulted in numerous deaths and caused more than half of Syria’s population to flee their homes.

Vincent Valeriano, a coordinator with LU Send and a team leader on the trip, said that Liberty students had the opportunity to help with the largest refugee crisis since World War II, as millions of people are being uprooted from their homes.

“Whether it is their homes being war torn or they are coming from religious persecution, it is a situation that needed to be responded to,” he said. “It is a historically significant time, and this will shape the history to come for a lot of these people because you have such a large number of people being displaced from their original country.”

At the holding camp where Liberty’s team worked, refugees would arrive by the thousands every day. Liberty partnered with a variety of relief organizations, handing out bags for refugees to hold their belongings, assisting with crowd control, playing games with the children onsite, sorting through trailers of clothes that the organizations had collected, and spending time talking with the refugees about their journeys.

“People who are displaced are often searching and questioning in a lot of ways,” Anna Strickland, LU Send director and a team leader on the trip, said. “To come alongside them when they are hurting and are not able to process what they have been through is really critical. I think it was a special opportunity for us as believers to show God’s love in a tangible way. We were able to bear a little bit of their sorrow with them, and rejoice with them in the hope that is ahead of them.”

Courtney Seiler, a junior majoring in biblical studies, said that while in Greece, Liberty’s team served as the hands and feet of Jesus.

Seiler recounted meeting one woman who was sitting with her ill daughter. The mother was in need of a pair of shoes, so Seiler walked with her to the clothing tent.

“She looked at a few pairs, trying to find some that were maybe a little stylish and practical,” Seiler said. “You could see the woman striving to hold onto some dignity. She was a wife, a mom, and a woman who was constantly on the move chasing down safety and hope. This broke me and reminded me of the deeper side to this crisis. They are people, just like you and just like me, hoping for a better future.” 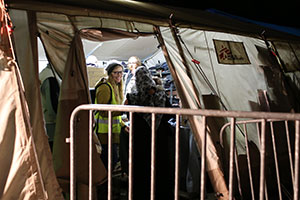 Seiler said that she has been on other international trips with Liberty, and that this trip to Greece through LU Send taught her valuable lessons.

“I cannot think of many other schools who have created a program such as this,” she said. “It pushes students outside of their comfort zone in order to put others first. It's invoking a heart of selflessness amongst the student body because we get to put school, relationships, and life on pause in order to step out and help someone in need. This specific trip to Greece reminded and challenged me to remember to count the cost of following Jesus. It is not easy, and He never said it would be. But it's worth it, and He is worth it.”

Liberty launched LU Send Now at the beginning of the Fall 2015 semester as part of LU Send, the university’s new central office for all Liberty student group travel, including local, domestic, and international trips. Through the program, students have provided relief aid in South Carolina in the wake of Hurricane Joaquin and during the aftermath of tornadoes in Mississippi last year. LU Send Now has deployed its first local outreach team to Appomattox, Va., (about 30 minutes from campus) to areas that were hit by a tornado earlier this week. Additionally, a team will be traveling to Flint, Mich., Feb. 28-March 5 to assist with the water crisis.