In Friday’s Convocation, Israel’s Ambassador to the United States Ron Dermer spoke to Liberty University students about the challenges the Jewish nation has faced throughout history and thanked the university for being “the most pro-Israel place in the United States of America.”

Dermer was named ambassador in 2013. During his time in service, Dermer has gained a reputation for being a principled leader of western values. Dermer has served as Israel's minister of economic affairs in the United States and as senior advisor to Prime Minister Benjamin Netanyahu. He was a columnist for the Jerusalem Post and co-authored the best-selling book “The Case For Democracy: The Power of Freedom to Overcome Tyranny and Terror.”

In his introduction of Dermer, Liberty President Jerry Falwell explained that Liberty was founded in part on a strong and unwavering support for the state of Israel. He noted that his father, Jerry Falwell Sr., Liberty’s founder, offered free trips to Israel to the first few classes of Liberty students in the early 1970s. From there, Liberty continued to nurture a relationship with Israel. President Falwell said his father was “largely responsible for the enthusiasm among American evangelicals for the cause of Israel.”

“I am proud to say that we have carried on Liberty’s unwavering commitment to Israel at a time when so many universities have embraced alternate positions,” he said. “It is our conviction that this support has never been needed more in a time when even our country seems to be no longer supporting our number one ally in the Middle East.”

Falwell added that Liberty sends hundreds of students to Israel each year, offers a concentration in Jewish studies, a Center for Judaic Studies, and recently opened the Liberty University Biblical Museum, featuring a large number of artifacts from Israel. 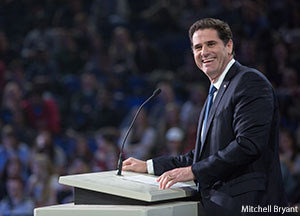 Dermer started his speech by remembering Jerry Falwell Sr., whom he had met in Israel.

“He was a staunch supporter of my country and a great champion of the alliance between the U.S. and Israel,” Dermer said, directing his comments to President Falwell. “It is crystal clear to me that your father has passed his devotion to Israel onto you. I want to use the opportunity to thank you (Liberty University) and the Falwell family for decades of unwavering friendship toward Israel.”

Dermer said he would always be honored to come to “this prestigious university,” noting that his visit followed the appearances of several presidential candidates, including Ted Cruz, Bernie Sanders, and Donald Trump.

“But with all due respect to them, I think it was much harder for me to get here,” he said. “For an Israeli ambassador to have the privilege to stand at this podium was harder than the rigor of a thousand presidential campaigns,” he explained, launching into the tumultuous history of the nation of Israel from ancient times to the fall of Israel, the Holocaust, and the birth of the State of Israel in 1948.

“Even though for years we were subjected to every evil under the sun, including persecution, massacres, crusades, and expulsions, year after year, decade after decade, and century after century the Jewish people still clung to hope of restoring their sovereignty,” Dermer said.

In modern times, he said, the truest test is who will stand with Israel — “and unfortunately many are failing that test.”

Dermer said that the enemies that rose up against Israel in the past no longer exist.

“Here at Liberty, you will not be hearing a speech from the ambassador of Babylon, you will not be hosting the ambassador of imperial Rome, but I am privileged to be standing before you today as the Ambassador to Israel, the one and only Jewish state,” he said.  “I promise you that in a Middle East steeped in darkness, Israel will continue to stand tall and proudly hold high the torch of liberty. I have no doubt that as we do, Liberty University will be right where it has always been — standing by our side, standing for the truth, and standing with Israel.”