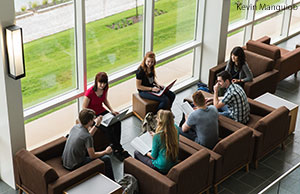 American Libraries is a professionally renowned publication sponsored by the American Library Association, and distributed to 65,000 individuals and organizations worldwide. The publication praised the Jerry Falwell Library for its flexible work and socialization spaces, spacious learning commons, personal study zones, and more than 30 group study rooms.

Angela Rice, dean of the Jerry Falwell Library, said this recognition is a tribute to Liberty’s mission of helping students further their research in an environment designed to facilitate individual and group study.

“It is an honor for the Jerry Falwell Library to be selected as one of the featured buildings,” she said. “The library was designed to be both inspirational and transformational. Through the variety of study areas, students and faculty have many choices of spaces to collaborate, discover, and create knowledge.”