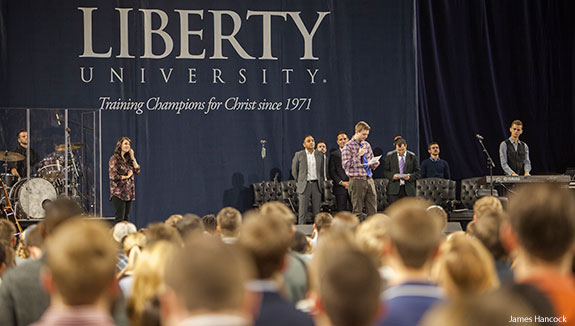 Liberty University students gathered for Wednesday’s Convocation in the Vines Center to celebrate the life of Jonathan Gregoire, a 21-year-old student who was killed in an accident on a train trestle in Lynchburg on Saturday. Gregoire’s family flew in from his hometown of Wilbraham, Mass., to join the campus community.

As friends shared words penned by Gregoire, including his final Facebook post, it was apparent that his life was lived boldly in Christ through the power of the cross. The special time of prayer and worship focused on the confidence Gregoire had in God’s love and eternal security. The students were joined by hundreds more faculty and staff who watched a streaming broadcast at Thomas Road Baptist Church.

“I will see you again Jonny,” said Josh Rowley, a Liberty student and Gregoire’s best friend since childhood, “and when I get there, you can teach me some of the mysteries of Christ that you have been learning all these years with Him.”

David Nasser, senior vice president for Spiritual Development, shared one of Gregoire’s favorite Bible verses, Philippians 1:21, which was cited in the post: “For to me, to live is Christ and to die is gain.”

Those words, penned from prison by the apostle Paul, were part of a letter of joy he wrote to remind readers of the confidence we have in Christ, Nasser said. He explained that happiness is fragile, as it is rooted in earthly safety, but joy is rooted in security in Jesus, and therefore holds fast even in hardship.

But the important distinction, he added, is what that joy is tied to.

“If you take that sentence,” Nasser said, “and you take Christ out of that, there is no hope. Put anything else there you want … for me to live is family … fortune … power … popularity, anything you put in there outside of Christ makes that sentence fall apart. ‘For me to live is Christ and to die is gain,’ that is the hope that we have now.”

Gregoire’s life was a testimony to this, and Nasser invited anyone who does not share that hope to accept Christ’s gift of salvation.

As the service ended, students shared handwritten notes with the Gregoire family and joined in singing a chorus that included the Philippians verse.

Students also met on Monday night to remember Gregoire at a candlelight vigil held in front of DeMoss Hall. His family was also in attendance. During the service, many of his friends shared stories of how he had impacted their lives and the dreams he had to serve God with his life.

Liberty’s Campus Pastors Office continues to meet with students affected by the tragedy and the university’s Student Counseling Services are available to those in need.