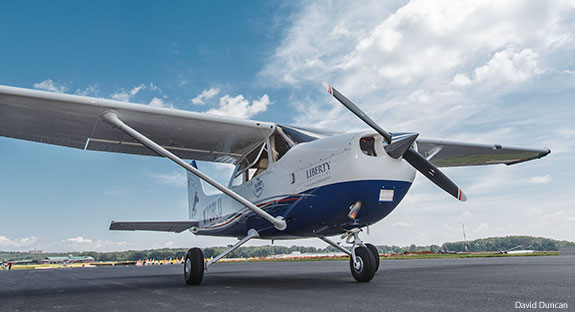 Textron Aviation Inc., a Textron, Inc. company, delivered the 10,000th single-engine aircraft from its Independence, Kan., facility to the Liberty University School of Aeronautics on Thursday, Aug. 28. The milestone aircraft, a Cessna Skyhawk, along with two other Skyhawks, were added to Liberty’s growing flight training fleet.

The Independence team and Liberty representatives marked the occasion with a delivery ceremony of the three Cessna Skyhawks, one of which features a custom decal displaying its title as the 10,000th Independence-delivered single-engine aircraft.

“The Skyhawk is the mainstay to the quality flight training we provide to America’s next generation of professional pilots,” said Ret. U.S. Air Force Brig. Gen. Dave Young, assistant provost for aeronautics education at Liberty. “Through the years, we have developed a great relationship with the team here in Independence and continue to choose Textron Aviation products because we trust the craftsmanship that goes into each aircraft.”

The Cessna Skyhawk has become the global standard training platform. There are more Cessna Skyhawks in the world than any other type of aircraft, with more than 48,000 having been designed, manufactured, and delivered since 1955, first from Wichita, and now also from the facility in Independence.

Since its first single engine delivery in June 1996, Textron Aviation’s Independence facility has produced the majority of Cessna single-engine piston products, as well as two types of Citation jets.

The Liberty University School of Aeronautics has grown from four students to the largest faith-based university aviation program in the country. The school offers a variety of online and residential programs, including a bachelor’s degree with concentrations in military aviation, missionary aviation, commercial/corporate aviation, and unmanned aircraft systems. The School of Aeronautics works closely with Freedom Aviation, the fixed-based operator located at the Lynchburg airport and owned by Liberty University.