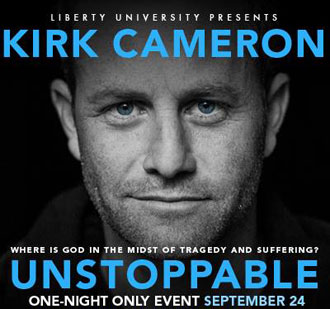 Facebook fans of Kirk Cameron’s new film, “Unstoppable,” which was made in partnership with Liberty University, were blocked from posting links to the film’s website, unstoppablethemovie.com, on Thursday. Cameron announced on his fan page that Facebook had blocked links to the website because the content was labeled “abusive and unsafe.”

“We have been officially shut down by Facebook and unable to get any response from them,” Cameron wrote. “This is my most personal film about faith, hope and love and about why God allows bad things to happen to good people. What is ‘abusive’ or ‘unsafe’ about that?”

After Facebook did not reply to an email from Cameron, he alerted more than 500,000 of his Facebook fans; he received more than 24,000 “likes” and 5,000 comments in just over an hour and the social media site removed the ban. Cameron said he did not receive an explanation.

“This is a real victory,” he told FOX News. “If we work together, we really do have a voice.”

An article on examiner.com also confirmed Facebook had blocked users from posting links to the site.

“Unstoppable” opens in theaters Sept. 24, with a special live premiere broadcast from the Liberty University campus.

Read more about Cameron and his partnership with Liberty University in the Summer 2013 Liberty Journal.