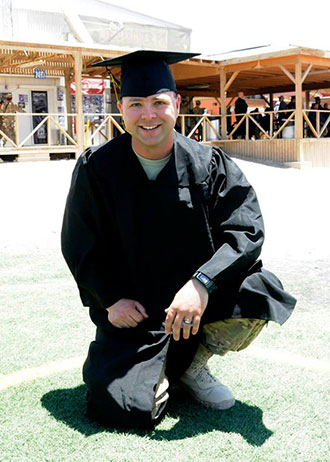 A special graduation ceremony at Kandahar Airfield, Afghanistan, on May 28 recognized 55 service members and civilians who received their degrees from 14 universities — among them was U.S. Army Staff Sgt. Eric Schenck, a recent Liberty University Online graduate. He received his B.S. in Religion. Schenck serves as a chaplain assistant.

Though he was numbered among the more than 15,000 members of the Class of 2013 at Liberty University — of which more than 4,000 were military — due to his deployment he was unable to attend Liberty’s 40th Commencement and its annual Military Graduate Recognition Ceremony, hosted by Liberty’s Office of Military Affairs.

Completing his degree during the deployment has been rewarding, he said.

“Finishing my degree overseas is especially important to me as it provides a great sense of accomplishment, not that I feel like the job is done, but that I made a quick win amidst the hardships of combat environment and separation from my family.”

Schenck said Liberty is very military friendly and because of its online education program, he was able to finish his degree despite the demands of deployment, including long hours and a lot of travel.

“Liberty University's online program is the best I've experienced,” he said. “It is mapped in a way that I am able to access everything easily. The Office of Military Affairs and Academic Advising have been extremely helpful. (The program) is so flexible that I was able to enroll and attend courses from across the world. Liberty's online library enabled me to complete research papers, and my professors have been very understanding and flexible as I balance mission requirements and course assignments.”

Schenck arrived in Afghanistan shortly before Christmas. This is his first tour. He and his wife, Adrienne, have two boys: Ryker (2) and Eli (11 months). Schenck plans to pursue an M.B.A. and feels called to serve in ministry in the field of recreation management.