As media reports continue to tell the story of Liberty’s men’s basketball team earning a bid to the 2013 NCAA Tournament, many Flames fans are reminiscing about the team’s last appearance there in 2004.

Just days before this year’s team clinched the Big South Conference title last weekend, a special souvenir surfaced — a tournament ring given to the 2004 team. Former head coach Randy Dunton said the ring was intended for Liberty founder Dr. Jerry Falwell, who was unable to attend the banquet where the rings were presented. The ring had been stored away, but unfortunately never made it into Falwell’s hands. 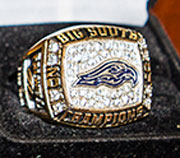 “The timing of Randy's delivery of the ring could not have been better, immediately prior to the men's team securing another appearance in the Big Dance! We are glad the ring found its way home just in time for the next tournament,” Falwell, Jr. said.

This year’s team will hear of its place in the 2013 NCAA Tournament bracket during the selection show on Sunday, March 17, at 6 p.m. on CBS.