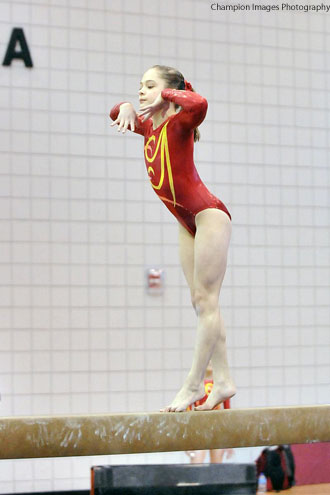 Alexis Stokes, a sixth-grade student with Liberty University Online Academy, has bigger goals than most 11-year-olds.

The young gymnast from Denton, Texas, has her eye on the 2016 Olympics in Rio de Janeiro, Brazil.

Alexis, a level 8 gymnast, started tumbling classes at the age of 4.  She has quickly worked her way up the ranks, going from level 5 (the second-lowest ranking for sanctioned competitions with USA Gymnastics) in 2008 to her current standing.

She placed first in her division at the 2012 Nadia Comaneci Invitational in Oklahoma City, Okla., on April 8 with a score that would have placed her first among level 10 gymnasts (the highest level of sanctioned competition).

She competed April 21-23 at the Level 8 Regionals in Kansas City, Mo., taking ninth in the all-around out of 59 girls in her age group.

“It will be really challenging (making the 2016 Olympic team), but not impossible,” Alexis said. “I would be turning just the right age that year to enter, a lot of my teammates want to go to level 10 and then on to college, but I want to become elite (level of the gymnasts at the Olympics) and aim as high as I can.”

With a schedule that demands more than 35 hours a week in training, Stokes has found the online homeschooling program meets her needs.

“I’ve already recommended it to my teammates,” Alexis said.

Her father, Sean Stokes, said Alexis was in public school until halfway through her fifth grade year, when she would take core classes in the morning and had to be taken out of school to head to the gym in the afternoon.

With the growing rigor of her schedule, Sean and her mother, Marilyn Massey-Stokes, knew a change had to be made.  Sean Stokes was an adjunct professor in counseling with Liberty University Online at the time and had learned about the academy that provided Christian online homeschooling to students in grades 3-12.

Sean Stokes said he was “not expecting an online program to be as rigorous” and appreciates the challenging courses that give his daughter the flexibility she needs in her demanding schedule.

He also appreciates the classes taught from a Christian worldview.

“Our prayer is that this (gymnastics) will be a platform for her so that she can proclaim Jesus,” Sean Stokes said.  “Part of keeping her grounded is reminding her that whether she finishes on the stand, or if she doesn’t place is second to how she performs, or rather, how she behaves as a Christian witness.”