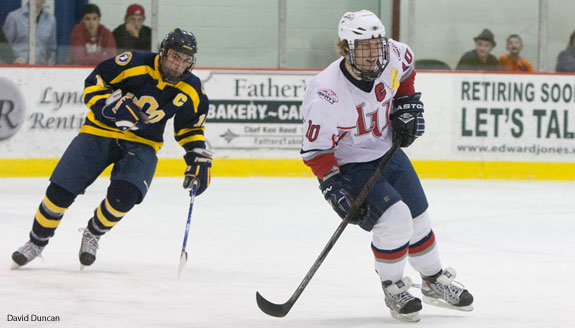 Senior Joe Smith’s success with the Liberty University men’s hockey team has paid immediate dividends, as he recently signed a professional contract to play hockey in Sweden. Smith will join the Ronnang Lobsters in Division 3 of the Swedish Ice Hockey Federation.

Smith is the second Liberty player to sign this year. Mike Morrison signed earlier this month with the Dunedin Thunder of the New Zealand International Hockey League.

Smith, a forward from Rothesay, New Brunswick, Canada, finished fourth on the team this past season in goals (11) and fifth in points (24). He was a team captain for two years and an assistant captain for one season. Smith finished his career with 142 games played, 46 career goals, 49 career assists and 95 career points.

Head coach Kirk Handy said Smith is a hard worker who played at a high level.

“He pushed other players to that level as well, (creating) time and space for others by playing effectively,” he said.

He added that Smith “contributed night in and night out” and his leadership was an invaluable resource to a team that underwent a lot of change in the past couple years.

Smith said he was surprised when he received the offer.

“I was fully willing to stop playing hockey after graduation and focus on ministry,” he said.

But when the offer came in, he saw it as an opportunity for ministry, being able to not only play a game he loves, but to share the gospel with fans as well as players.

Smith is a Biblical Studies major and will graduate in May, before departing for Sweden on July 29. He will assist at hockey camps with Hockey Ministries International in Sweden before joining his teammates for the 2012-13 season.