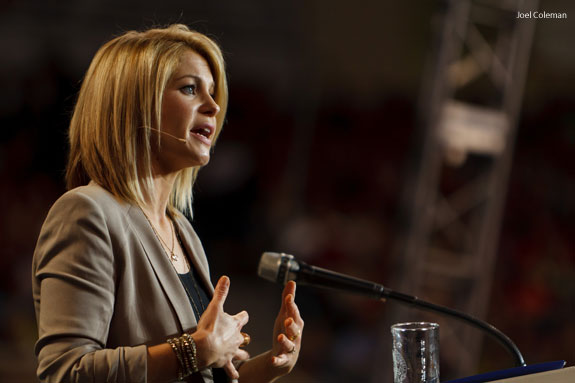 Actress Candace Cameron Bure, most known for her role as D.J. Tanner on the television series Full House, told Liberty University students on Friday that she was not like the typical child star who experimented with drugs and alcohol in her teen years. Although she said she enjoyed being the “good-kid” and a “people-pleaser,” she admits she still wasn’t fulfilling a Christian life.

Bure, who began acting at age 5, did not grow up in a Christian home, but became a Christian when she was 12. During her teen years, she was busy with Full House and church became an afterthought, she said.

When her brother, actor Kirk Cameron, and his wife, Chelsea Noble, began working on the Left Behind movies, a Christian series about the rapture, she started reading the “Left Behind” books. She identified with the character Bruce Barnes whose occupation was a pastor but he was not truly saved.

“I continued to call myself a Christian for all of those years but I was certainly not producing the fruit,” Bure said. “I, too, had been using God’s forgiveness as a license to live my life the way I wanted to, not the way he wanted me to. I asked myself, if God came back at this very moment, would I be left behind?”

She describes this moment in her life as the point when she truly became a Christian and started following God’s will.

Bure married NHL star Valeri Bure, whom she met through Full House co-star Dave Coulier in their last season of the show. She took a 10-year hiatus from the entertainment industry to be a stay-at-home mom for their three children: Natasha, 13; Lev, 11; and Maskim, 9.

When she returned to acting, she had a new perspective on life and her convictions as a Christian.

“It’s not easy to be a Christian in the industry. … Hollywood has a way of defining you if you don’t know who you are before you get out there. I had to know my values and convictions before I went out there because it’s easy to get sucked into it,” Bure said.

Bure is currently working on the ABC Family television series Make it or Break it.

“From the enthusiasm of the students alone, I would love for my kids to go to a place like this,” she said. “The core values that are taught here are amazing.”

Bure met with students after convocation and signed copies of her book, “Reshaping it All.”

“I grew up watching Candace on Full House as D.J. Tanner and I always wanted to be her,” freshman Lindsey Patkos said. “She has such an awesome testimony and I really respect her for staying strong in her faith in the Hollywood business she works in.”