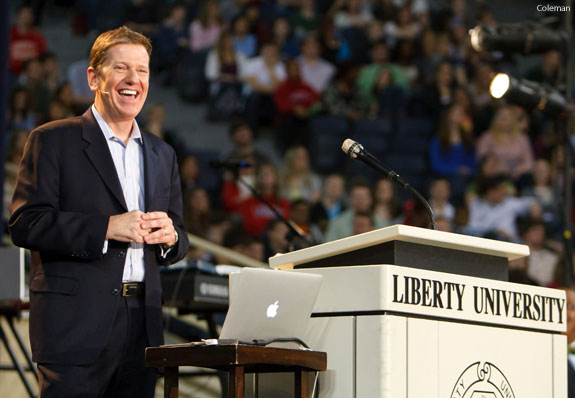 Michael Hyatt, chairman and chief executive officer of Thomas Nelson Publishers, charged Liberty University students at Wednesday’s convocation to deal with the offenses in their lives in a healthy, Christ-like manner instead of allowing them to damage them spiritually.

“I’ve worked with a lot of Christian authors, a lot of Christian recording artists, and unfortunately I’ve seen a lot of them fall by the wayside, get taken out for one reason or another,” said Hyatt. “Here’s my premise, to put it very simply – if you’re going to survive and if you’re going to fulfill your God-given calling, you must learn how to handle criticism and overlook offenses.”

He said offenses are inevitable, and while Satan intends offenses for destruction, God intends offenses for good. He also reminded students that being offended is a choice and that people will be watching them closely to see how their faith plays a role in dealing with conflict.

“For some people you’ll meet in the marketplace, you’re the only representative of Jesus that they’ll ever have,” said Hyatt. “They will make decisions about what it means to be a Christian and then make decisions about Christ himself — never having read the Bible — simply by observing your behavior, particularly under pressure.”

This was Hyatt’s first visit to Liberty.

“I loved being at Liberty — the energy of the students, just their commitment to Christ … I had dinner with 10 students last night and I was very impressed,” he said after convocation. “They have it together a lot more than I did at that age. It’s a great university.”

Hyatt became a Christian during his freshman year at Baylor University in Waco, Texas. He began his publishing career at Word Publishing while he was still a student. He served as Vice President of Marketing at Thomas Nelson in the mid-1980s and also started his own publishing company, Wolgemuth & Hyatt. He is also a former chairman of the Evangelical Christian Publishers Association. He has been CEO of Thomas Nelson Publishers since 2005.

Hyatt has been speaking publicly at events for more than 25 years, and has also appeared on more than 1,500 television and radio programs. He is also the author of four books, including a New York Times bestseller.

Hyatt and his wife, Gail, have been married for 32 years and live outside of Nashville, Tenn. They have five daughters, two grandsons and three granddaughters.