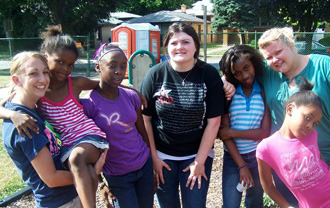 For the fourth year in a row, Liberty Baptist Theological Seminary and Liberty University have received the Courts Redford Award for Excellence in Student Missionary Deployment from the North American Mission Board (NAMB).

The missions agency, supported by the Southern Baptist Convention, presents the award annually to the leading colleges and universities that effectively mobilize their students to impact North America for Christ.

“I think this is a great partnership,” Simmons said. “It gives students an opportunity to respond to God’s call and gives them an opportunity to develop their leadership skills in being next-generation leaders — and they get to do things that make a difference in the lives of lost people as they serve.”

“Liberty has been a tremendous partner with the NAMB to mobilize students to start new churches and touch the lives of lost people across the U.S. and Canada, and we’re very appreciative of that,” he said.

Dr. David Wheeler, professor of evangelism and NAMB missionary liaison at Liberty, said the program is a great fit because the NAMB shares the same mission of coming alongside the local church to help fulfill the Great Commission. NAMB is just one of several missions organizations Liberty partners with in this mission.

“Our students are responding well and I’m really proud of what they’re doing,” Wheeler said. “The whole point of this is to get our students out involved in various types of ministry; we really try to push ministries that have either a strong evangelism push or they’re connecting with church plants. We are the largest evangelical university in the world; the DNA of this place is church planting and evangelism.”

Wheeler said LBTS set a goal to send out 50 workers this summer, which would make Liberty the major provider of summer interns with the NAMB.

The award is named in honor of Courts Redford who, in the summer of 1944, mobilized more than 70 students to serve across the country through the Southern Baptist Convention’s Home Mission Board, sparking the student missionary strategy. Redford (1898-1977) served the Home Mission Board for 21 years (1943-1964), the last 10 years as chief executive officer.