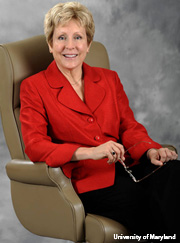 Liberty alumna Deborah Yow (‘87) was recently named director of athletics at North Carolina State University, the first female athletics director in the history of the university.

Yow, who earned her master’s degree in counseling from Liberty, has spent the past 16 years as athletics director for the University of Maryland. During that time the university secured more than 20 NCAA championships under her leadership. Yow also served as president of the National Association of Collegiate Directors of Athletics and the national Division I-A Athletic Directors Association.

NC State chancellor, Randy Woodson, shared that the university’s nomination committee and trustees were seeking an athletic director with a proven record of successful leadership.

“I am very pleased to say that we found this leader,” he said. “[Yow] has an incredible résumé and the ability to lead and manage.”