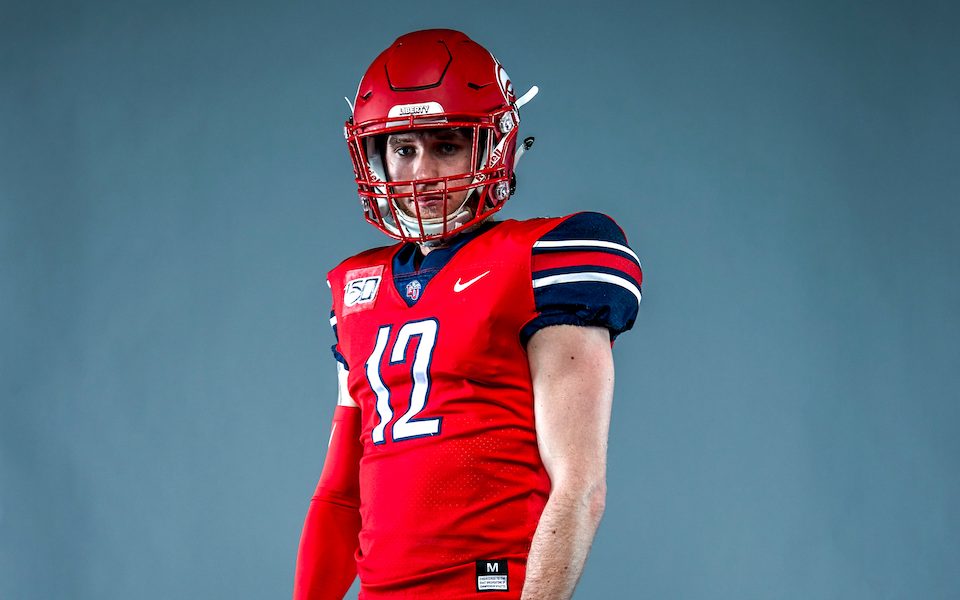 But moments later the crowd began to cheer as 18-year-old freshman Stephen Buckshot Calvert trotted onto the field for his debut as Masha walked off. The young quarterback took the snap from shotgun and looked calmly to his left. Just as his receiver was beginning to make his break, Calvert threw a fastball to the sideline, completing the pass while igniting a roar from the crowd.

Since that evening Sep. 17, 2016, Calvert has cemented a spot as Liberty’s starting quarterback for the past four years, writing himself into the Liberty football record books.

Calvert was raised in Plantation, Florida. Despite having to endure the consequences of his parents’ divorce, Calvert was blessed by consistent support and encouragement from his family.

“They were always at every game,” Calvert said. “My mom, my dad, my stepdad, my grandma. I always had that support staff around me. They always wanted me to be successful at whatever sport I was playing.”

After a difficult knee surgery sidelined him for his entire high school sophomore season, the young talent decided to leave his private school to play at Miami Carrol City High School, an inner-city school in
southern Florida.

Calvert’s junior season of high school was difficult as he battled alongside his teammates to a 5-5 record. Despite not leading his team to a winning season, the strong-armed 16-year-old drew interest from multiple DI programs in the state, including a scholarship offer from the University of South Florida.

During Calvert’s senior season the rising star led Carrol City to an impressive 10-2 record, topping nationally-known Miami Central 7-6 in the regular season. Carrol City won its opening playoff game but was then knocked out of postseason play in the second round of the playoffs when Miami Central returned the favor in a rematch game.

Despite featuring as a freshman and starting every year since his sophomore year, Calvert reached his full potential during his senior season in 2019, overcoming a slow start to the year.

Calvert’s 2019 season began with three interceptions and one touchdown pass in the first two games combined. Since then, the senior quarterback has thrown for almost 3,400 yards and 26 touchdowns with only five interceptions on the year.

Calvert has established himself as one of college football’s most explosive quarterbacks, currently ranked ninth in FBS passing yards.

“That’s what kind of keeps me going right now,” Calvert said. “People have been telling me that (having a child) changes your life. I’m starting to finally see it.”

The busyness of the college football season has kept Calvert from being able to spend quality time with his newborn child and family. But the motivation that he found through fatherhood has given the Flames standout extra incentive to produce weekly.

As the Flames look forward to a likely college football bowl game appearance, Calvert will do so with hopes of teaming up with NFL-hopeful Antonio Gandy-Golden to put on a clinic for NFL scouts.

Calvert values his star receiver’s friendship as much as his
scoring assistance.

“There’s not really anyone who could talk to him and not like him,” Calvert said. “It means a lot to have a guy who’s not only going to make every play on the field but is going to be there for you off the field.”

A shot at the NFL is probable for Gandy-Golden, but Calvert’s chances are
less likely.

NFL scouts are wary of Calvert’s gunslinger type of play style as well as his elongated release and hitch step forward that would be exploited in
professional football.

“It’s a dream that I make it to the NFL,” Calvert said.

But regardless of his pro football future, Calvert’s collegiate legacy is cemented in the Flames record books, ranking first in both passing yards and touchdowns. The four-year starter is aiming to continue growing as a Christian as he prepares to depart from Liberty and pursue a profession.

“Over these last four years I can honestly say I can see (God) moving in my life,” Calvert said. “I think the best thing for me and for my life is to let God take over and carry me.”