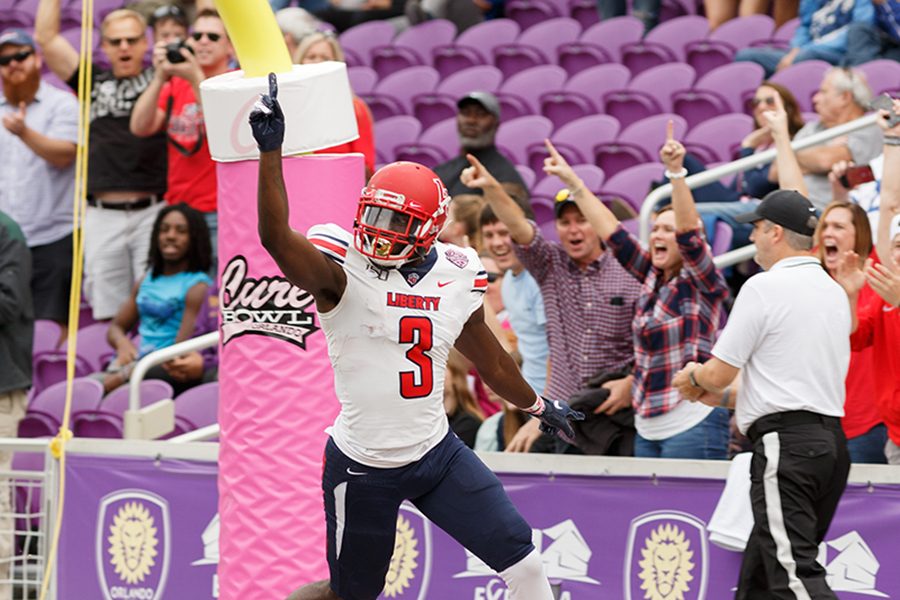 Liberty University President Jerry Falwell Jr. glanced up from the crowd of media members flocking around him and locked eyes with a Flames alum who slowly smiled and pumped his fist with joy. Falwell Jr. looked down at the ground, smiling as he shook his head in wonder and contentment.

University Founder Jerry Falwell Sr., who passed away in 2007, had a dream. His son, Jerry Falwell Jr., took practical daily steps to obtain it. Part of that dream was for Liberty to be to Evangelicals what Notre Dame is to Roman Catholics. A high caliber football team was always a part of that vision.

The Flames made an enormous step forward Saturday when their football team defeated the Georgia Southern Eagles 23-16 in the Cure Bowl, launching the Flames into the record books as the third team in college football history to win a bowl game in their first season of bowl eligibility. The Flames finished the season 8-5.

Following a touchdown on their first drive of the second half, the Flames took their foot off the gas offensively, changing the strategy from a gusty, go-for-the-jugular approach to a more conservative, clock draining method.

The first-year bowl team struggled in the latter part of the game, turning the ball over twice while failing to generate enough offense to put the ball in the end zone following the team’s first drive of the third quarter.

The Flames defense stifled the bewildered Eagles offense, holding them to three field goals after they scored their only touchdown in the second quarter.

The Flames’ seniors owned the evening as quarterback Stephen Buckshot Calvert completed 12 passes for 220 yards in the first half and finished with 270 yards and two touchdown passes. The four-year collegiate starter crossed the 12,000 career passing yards threshold during the game, further cementing himself as the greatest quarterback in Flames football history.

“To see all the hard work you put in payoff is really humbling, and I just give all glory to God for it,” Calvert said.

It was an evening that would have made Falwell Sr. proud as his Flames showed the world that it is possible to put Christ first while performing with excellence in athletics.

Flames defensive end, Jessie Lemonier, was dubbed as the Cure Bowl MVP by adding to Liberty’s defensive dominance with his eight tackles, including two sacks.

Fifth-year senior running back Frankie Hickson became the first Flames running back since Rashad Jennings to rush for 1,000 yards in consecutive seasons.

And now there is a Cure Bowl trophy to prove it.