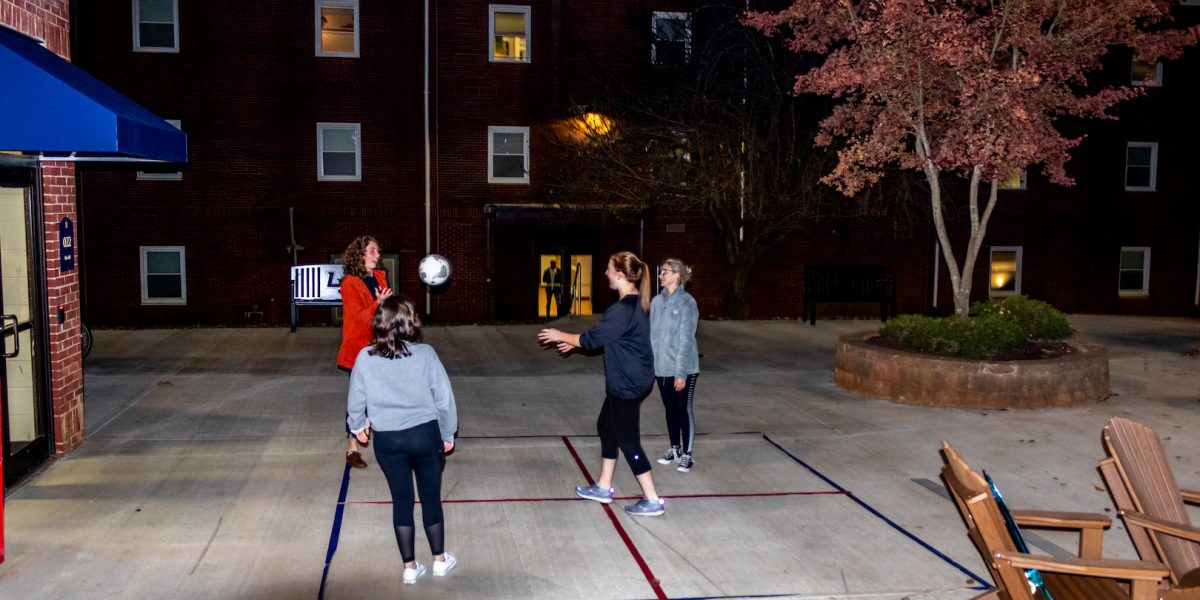 Each night, before rounding the corner of Hill Dorm 22, the sound of a rubber ball meeting cement echoes off brick buildings.

This is four square territory.

With the cicadas chirping from the trees and a warm breeze floating between the buildings, three Liberty University students come out to the courtyard. With LU logos painted on their faces  from a recent football game, the students begin a new game, fueled by the beat of the marching band walking back from the stadium after a Flames victory.

To those playing, this game is just as intense as the one they cheered on earlier that day.

“Gotta do whatcha gotta do. This is four square,” one of the players shouts.

“This is not a weak man’s sport,” says another.

A slap of skin against rubber and a harsh “boing” as the ball hits the concrete is followed by a cheer from one and a
shout of disbelief from another.

“That was in! It hit right here between his feet,” one girl says.

Lighthearted shouts of “fight, fight, fight” break out from the already-growing line of 10 students eager to join this game that has only just begun.

This scene could almost be mistaken for a midsummer’s night, if it were not for the students sitting at picnic tables to the side with computers and books. They only look up when a shout of “heads” erupts from the line of players as the blue ball comes crashing down on the papers.

This snapshot of time represents something much bigger than four squares and a rubber ball. In between these brick buildings, a community is forming.

“If you are playing a game, then it gives you an ‘in’ to talk to people,” McKinley Chistoson, a freshman and frequent four-square player, said.

This display of community has become synonymous with the Hill.

“It’s family – 100% family,” Shantae Anderson, who has lived here the past three years, said. “Everyone just comes along each other. We boost each other up, encourage each other to do our best, and we pick each other up when we are low.”

But this place of community is no longer something the students take for granted. Last year, the construction on the Hill made this scene impossible, Anderson said. In an effort to make common rooms in between the dorms, the courtyard area was blocked off.

“Last year did not feel like family,” Anderson said. “(The construction) literally kept us from being able to fellowship with each other.”

Anderson said that students from the different dorms had no place to meet, host tailgates or play four square or football, so there was nothing bringing Hill students together. After a series of difficulties in the construction process, the university decided to halt construction and reopen the courtyard area near the end of last spring semester.

“When they finally got the hub open, the No. 1 thing that brought all of us out to the courtyard was four square,” Anderson said.

This tradition has carried through and been passed on to this year’s students.

So as the clock hits 12:29 a.m. and curfew approaches, four students remain to get one last round in before ducking into Dorm 22 where it all began. The courtyard, which was bustling minutes ago, is quiet.

But it will be alive again the next night. New students will pass by and join and returning students will come out at the same time, just like clockwork, for another night of friendship, maybe some lighthearted fights and some four square.