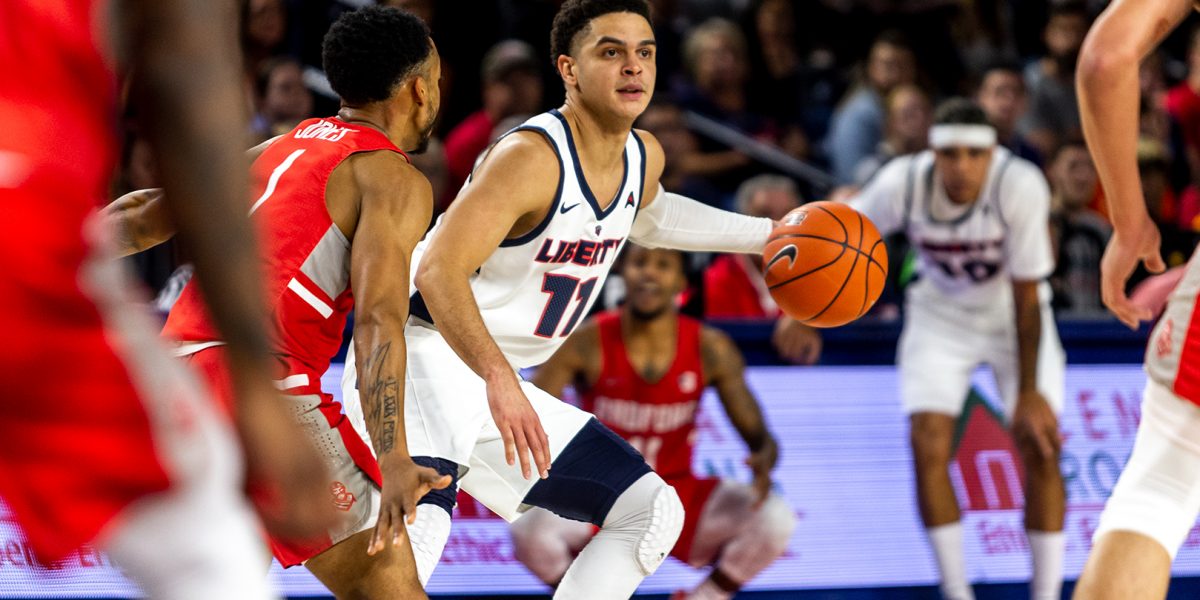 For the first time in school history, the Liberty men’s basketball team is 9-0.

The Flames are currently one of only 20 undefeated college basketball teams, their record including victories over competition like Radford University, Navy, Rice and Kansas City, as well as a championship title in The Islands of the Bahamas Showcase Championship.

Players all across the Flames roster have made major contributions to the team’s victories, including senior guard Georgie Pacheco-Ortiz, who reached 1,000 career points during Friday’s game against Kentucky Christian University.

Pacheco-Ortiz said the achievement was something he’s dreamed of for years.

“It’s a dream come true for me, being able to compete at a high level in Division I,” Pacheco-Ortiz said. “It always was my dream and I never thought I would score 1,000 points in my career. I’m proud of myself. I came a long way, and now to be here is a blessing to me.”

The Flames have also seen valuable contributions from freshmen Shiloh Robinson and Kyle Rode, with Rode averaging 8 points per game and 26 minutes on the court. Rode has started the last several games for the Flames in place of redshirt senior Caleb Homesley, who is managing an injury.

The two freshmen, who are also roommates, have been a competitive driver for the team with their aggression and skill on the court. Rode currently has 10 steals on the season, and Robinson leads the team with 55.6% shooting.

Redshirt senior Scottie James said seeing his teammates succeed is a boost to the whole team.

“Everybody on our team can play,” James said. “We were excited to have the opportunity to get them into the game.”

The Flames most recent victory was an 88-42 Black Friday victory over KCU, when the entire Flames roster saw time on the court with the exception of Homesley and freshman Marten Maide, both of whom were not dressed out to play. The team even saw minutes from Head Coach Ritchie McKay’s son and head manager Luke McKay.

Ritchie McKay said putting his son on the court was a special experience.

“Luke is spectacular,” Ritchie McKay said. “You guys don’t know him like we do, but he’s such an incredible young man and he’s worked really hard, so it was kind of fun to put him in the game.”

“I could have told you he’d never shoot, but when he did shoot, it looked much more like his mom’s shot than his dad’s,” Ritchie McKay joked.

The Flames host one last home game of the semester against Trinity Baptist College Monday, Dec. 2, at 10 p.m. before they embark on a month-long streak of away games. The seven-game away streak includes visits to Vanderbilt, LSU and ASUN conference opponents NJIT and Florida Gulf Coast University.

Starting with their Jan. 2 game against FGCU, the Flames will exclusively play ASUN opponents for the rest of the regular season. Liberty is currently ranked first in the ASUN conference, followed by North Florida and North Alabama, who are 5-4 and 4-4 respectively.