Profile: Freshman hockey goalie has established himself on DI team 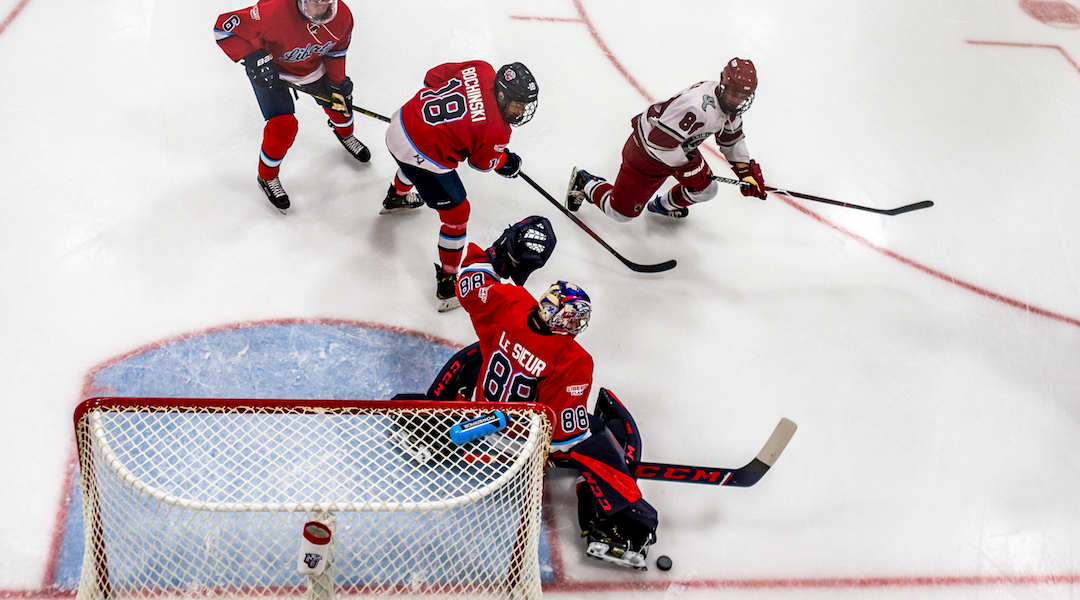 Many freshmen experience their first months away from their homes and families when they come to college. But Flames freshman goalie Cedric LeSieur is older than most freshmen, and has been away from home since he graduated high school.

LeSieur spent a few years after graduating high school playing for a junior hockey team on Vancouver Island, on the opposite (west) side of Canada from where he grew up.

“In classes, sometimes I hear a lot of the freshmen talking about how they miss home, and here I am, a 20-year-old freshman who has been living away from home since he graduated,” LeSieur said.

LeSieur is originally from Quebec, Canada, where he began skating at age 3. Being a goalie has been something that has always interested him since he volunteered to play at a young age.

“I think I was 6 or 7 and everyone was taking turns playing goalie, and I loved it,” LeSieur said. “As soon as I tried it, I loved it. Whenever someone else did not want to play goalie, I volunteered … from then on I have just always been a goalie.”

LeSieur’s father played goalie, and that is something the freshman admits may have factored into his desire to play the position.

Head Coach Kirk Handy says that LeSieur is a joy to be around and has added a lot to the team chemistry.

“He is a guy who is energetic and is fun to be around,” Handy said. “On the ice, he is a guy that works hard, and he really listens to (Assistant Coach Dan Berthiaume) so he can be the best goalie he can be.”

Handy has been impressed with everything he has seen from LeSieur in his short time at Liberty, acknowledging how LeSieur manages to always stay focused, whether in practice or in the classroom.

“He has his head screwed on right, he gets his schoolwork done, he does well in the classroom, he’s a great guy to be around in the locker room and I think he is someone who is really enjoying the college hockey experience,” Handy said.

LeSieur’s third game as a Flame came during Midnight Mayhem. LeSieur says he has never experienced a game that late and with that type of crowd before.

LeSieur is one of several new faces to the team this year, but that changeover has not kept the team from their usual standard of winning games left and right.

Handy has noticed that though there has been an increase in new players, they play as if they have been a part of the team for years.

“We have a lot of new guys, and they have all blended in together well,” Handy said. “(LeSieur) has done well along with the leadership of our senior guys who have helped to take some of the newer teammates under their wings.”

LeSieur is an exercise science major at Liberty. This field of study first caught his attention after an ankle injury caused him to miss two months in his first year being away from home.

He admitted that it was frustrating missing the time, but it helped him realize the importance of maintaining a healthy body.

“It was right around the middle of the season, and we started winning games which made me happy for the team, but it was hard because I wanted to be a part of that,” LeSieur said. “But it helped me to learn that you have to be happy for the team no matter what, and that you can only control so many things.”

In the end, LeSieur knew from his first visit at Liberty during College for a Weekend that Lynchburg felt like home.

“I was staying at Jacob Fricks’ house during CFAW – everyone was willing to talk to me,” LeSieur said. “You could tell that everyone enjoys being here, and it is not something that they are just putting on.”