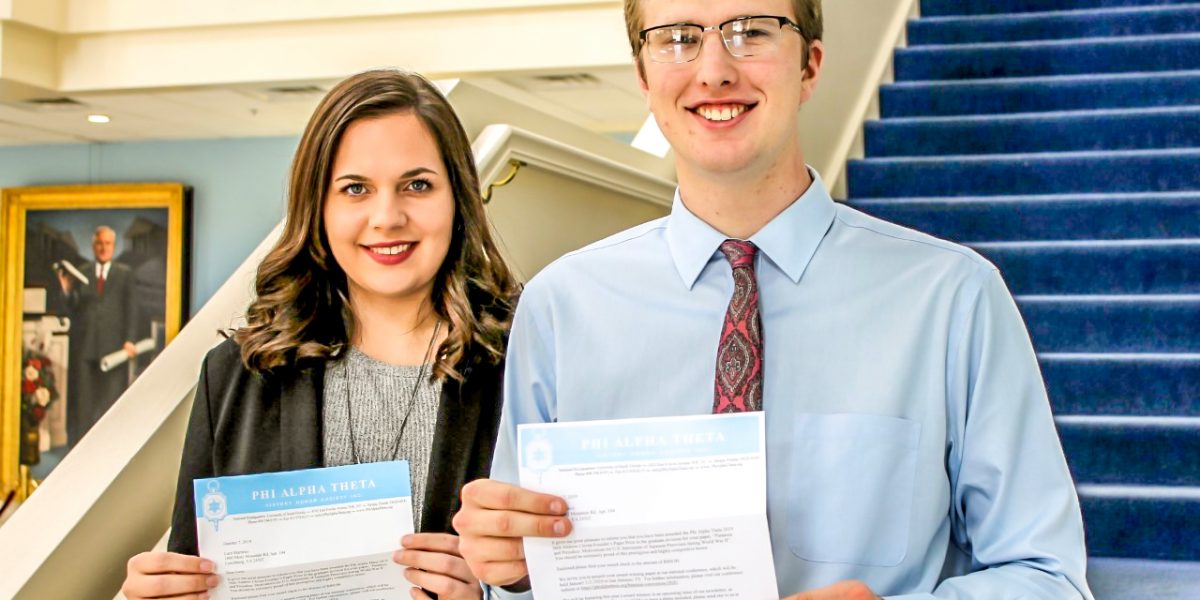 Two Liberty graduate students pursuing their passions took the spotlight in the Phi Alpha Theta honors society. Their papers were two of the top three winning entries in a national paper competition this September hosted by the society.

Mark Myrdal and Lura Martinez are both history graduate students at Liberty. As historians, both enjoy writing, but for Myrdal, the actual penning isn’t the best part of the process.

“Doing the research, finding the stuff you need – that’s what I really love,” Myrdal said.

Martinez and Myrdal both love the history department and the professors in it. They are especially grateful for the impact Dr. David Snead has had on their entire experience at Liberty. Snead, the faculty sponsor of Liberty’s chapter of Phi Alpha Theta, played a key role in helping Martinez decide to pursue her master’s degree in the first place.

“He is always pushing students to succeed, sending out emails,
reminders and opportunities,” Martinez said.

Both of the winning papers were written for one of Snead’s classes, and both students credit him with advising them to enter the papers into the competition. They edited the papers extensively after the class was done to create the drafts which won.

Liberty’s chapter of Phi Alpha Theta is, according to Martinez, a sort of “gold standard” for history honors programs because of its multi-faceted activities and participation.

“It’s given me an opportunity to get to know the professors who take the time and effort to advocate for you and mentor you to succeed academically,” Martinez said.

While Myrdal is a member, Martinez has stepped up to become a chapter officer for the society. She loves being more involved with the extra responsibilities the position gives her.

Winning the competition is one of the biggest highlights for both of the historians. Both topics were related to World War II. Neither of the subjects were well-known, but the competition provided a unique challenge and interest for the students as they researched.

Myrdal chose to focus on exemptions from the draft during World War II relating to agriculture and the importance of agriculture during the war. Martinez wrote about Japanese-Peruvians who were interned in the USA during the war, even getting the opportunity to interview seven of the survivors still living at the time of writing the paper.

“It was a story that needed to be told,” Martinez said.

Both Martinez and Myrdal have high hopes for the future. Martinez is in the process of applying for her doctorate in history. She already has multiple job offers for positions teaching.

“I want my passion to translate into my future students. I believe it’s my
calling to do that,” Martinez said.

Myrdal is also pursuing his doctorate – it’s just a matter of when and where for him. He wants to work in a museum or
archival setting.

“Whatever you’re passionate about, pursue it,” Myrdal said.