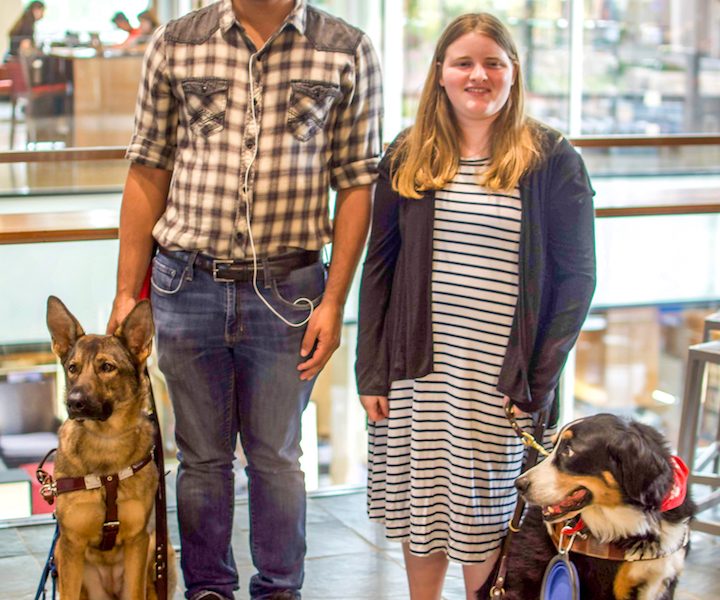 Dogs are known as the best companions for man, offering love and protection to their owner.

For Kayla Cole and Nick Martinez, their furry friends serve not only as friends, but as guides through life.

Cole and Martinez are both blind. They both knew early in their lives that they wanted guide dogs because of the freedom guide dogs offer.

Cole, a sophomore at Liberty, lives in Commons 2 with Maple, her guide dog. Maple is an 8-year-old Bernese Mountain Dog, and she and Cole have been working together for six years – since Cole began high school.

Martinez lives off-campus with his guide dog, Gaia. Gaia is 3 years old, and she and Martinez have been working together for a year and three months.

Martinez’s inspiration to get a guide dog came from a blind mountain climber named Erik Weihenmayer, who was the first blind person to reach the summit of Mount Everest.

Maple assists Cole in everyday tasks like walking to class and getting food to eat.

“This (campus) is so accessible and so accommodating for the most part,” Cole said. “It’s easy for us to navigate. There’s not a lot of streets – there’s a lot of sidewalks.”

Not only is the physical design of campus helpful to Cole – so are the people who attend the school, Cole said.

“I asked my RA, ‘Is there any way we can get a trash can where I take Maple out?’ because I struggled finding a trash can all the way on the other side of the building,” Cole said. “The next day, there’s a trash can.”

Martinez explained that, in his personal experience, having a guide dog offers him more independence and efficiency in navigation and travel.

“A cane doesn’t take directional commands,”
Martinez joked. “When you travel with a cane instead of a dog, you have to know where you’re going and have a sighted person teach it to you ahead of time. With my dog, even though it is nice to do something new for the first time with a sighted person, it’s not required.”

When she is not working, Gaia loves running and playing tug-of-war. She goes to sleep every night with her tug-of-war toy under her head. Martinez described Gaia’s personality in one word: “energetic.”

When Maple is not working, she loves attention, belly rubs and cuddling, and has a favorite blanket instead of a toy. Cole described Maple’s personality as “interesting.”

Martinez and Cole want the general public to know that guide dogs are working animals, and they should be left alone to do their jobs.

“No touch, no talk, no eye contact,” Cole said. “If they look into your eyes and you’re all happy and making kissing faces, the dogs react in different ways. They will gravitate toward you and get distracted from what they should be doing.”

These service dogs are life-changing for their owners. Because of this, Cole and Martinez expressed frustration when non-service animals cause public disruptions.

“The biggest challenge I face is dogs that actually are not service dogs,” Cole said. “I’ve seen stories where emotional support animals, because they’re not trained the way (service dogs) are to handle situations … (they) maul other dogs and other people. It causes a bad reputation for people who have service dogs.”

For Martinez, the process of applying for, matching with and then finally working with a guide dog took almost two years. He is passionate about service animals being legitimately trained because the consequences can be severe if they are not trained properly.

“If one of our dogs gets attacked … it usually puts our dogs in retirement because then our dogs are constantly on the lookout for ‘when is that next dog going to come get me,’ and if they’re on edge, then they have to retire because our dogs are supposed to be calm and focused on their jobs,” Martinez said.

Guide dogs are intelligent, loyal and hard-working animals, and they still want to have fun like humans do. But for Cole and Martinez, these dogs are family members, and their lives would not be the same without them.