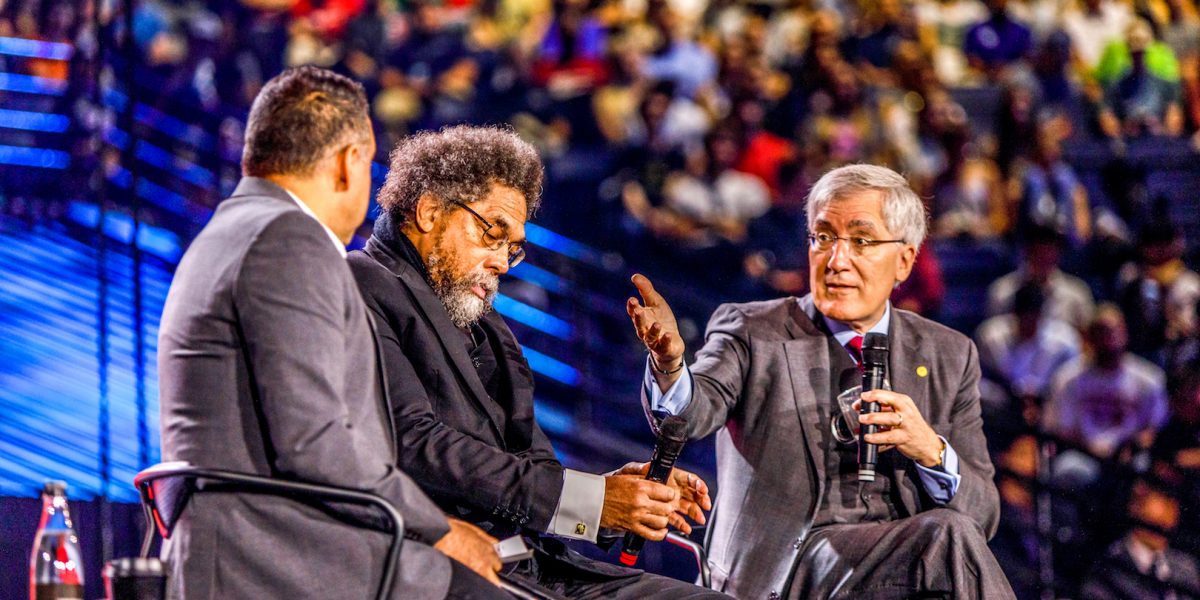 Senior Vice President for Spiritual Development David Nasser moderated the conversation. The two friends spoke on the need to be willing to discuss varying ideas and differing views in a civil and kind way. The professors, both believers, spoke to the students from a Christian worldview.

George opened by speaking on the importance of knowing the truth of Christ as the foundation of one’s beliefs before all else.

“We as Christians believe that the truth is not merely a set of propositions about the way the universe works or the way a cell operates or what caused the First World War or anything like that,” George said. “Those are important things, those are worth knowing, those are valuable truths, but we believe the truth is not just a set of propositions, but above all, the truth is a person, the person of Jesus Christ, the second person of the blessed Trinity, our Redeemer.”

West discussed that although the two share beliefs on different sides of the ideological spectrum, their faith allows them to meet one another in the middle.

“We revel in each other’s humanity and we meet each other at the foot of the cross,” West said.

“Allowing one’s views to be challenged is essential,” George said.

The professors spoke on the importance of education and the importance of keeping Christ at the center of life despite what a student’s education looks like.  West, who completed his Harvard degree in three years, encouraged students to stay in college for four years and learn how to die for Christ.

George spoke on the need to seek truth and have open dialogue with everyone to be able to find the heart of the truth.

“The opposite of education is indoctrination,” George said.  “Indoctrination means finding the best to be said on all sides of the question; being willing to have whatever your views are challenged in a serious way so you can get to the truth of the matter. The reason we need open minds and intellectual humility and robust dialogue and freedom of speech is not because there is no truth, but because those are the conditions of truth seeking.”

West spoke on the matter of humility and the willingness to listen to other people’s views.

“Your mind is to be used in such a way that you recognize both your own limitations,” West said. “We all have various forms of ignorance and we all have various forms of wrestling with sin, but at the same time something is unleashed intellectually, spiritually and morally in relation to others you agree and disagree with because when you learn, when you listen, then you have the kind of genuine humility, and that humility is rooted in great gratitude on the one hand and a sublime dependence on a God greater than you.”

At the conclusion of convocation, the professors played a game of “Commons Denominator” to test each other’s knowledge of one another. Dr. West represented Commons 1 and Dr. George represented Commons 2. The winning dorm would receive 1,300 Krispy Kreme doughnuts, as well as bragging rights.

Convocation ended on a lighter note with the doughnuts being split between both dorms due to a tie.