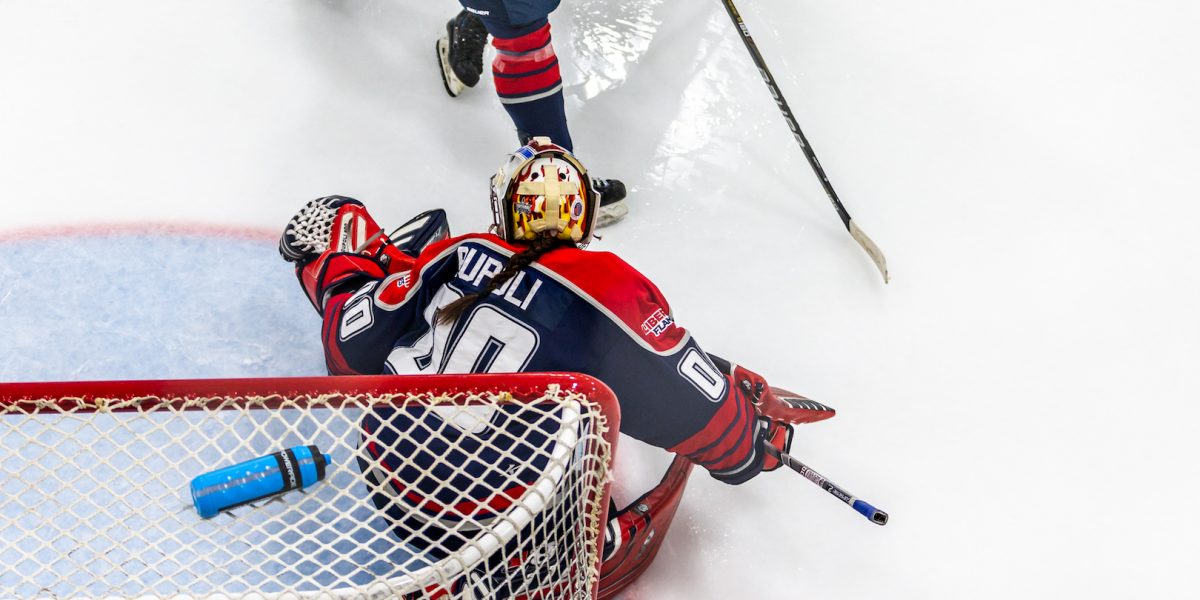 The refreshing, white ice from the hockey rink seemed almost as chilling as the victory the Liberty Women’s Flames took on Saturday, Aug. 31.

In the first exhibition match of their season, the Liberty Flames looked strong as they defeated the Hamilton Hawks 7-0.  The Lady Flames kept up energy and connecting passes throughout almost all of the 60 minutes of game play.

“Obviously, the chemistry is here,” junior Shelby Bradford said.  “We have worked a lot, and it is all about the practice and getting that chemistry down. Then transferring that, you play how you practice.”

Going strong in the first period, Bradford scored the first goal, and freshman Yannick Truter followed her lead to start the game off with a 2-0 lead.  The team’s momentum filled their first period of game play and showed that their practice has paid off.

Moving swiftly into the second period, the Lady Flames continued to dominate by not allowing any progress to be made by the Hawks.  The Flames might not have scored any goals until the final two minutes, but they would pick up the pace once again for the third period.

“We have to change our expectations as we go on,” Head Coach Chris Lowes said. “We want to play as a team who is consistent for the whole 60 minutes with good energy.  I think we saw a lot of that in this game.”

The Lady Flames would score four more goals in the third period.  Senior Vanessa DeMerchant, graduate Valeriia Manchak, senior Dana McLeod and Bradford would all score goals, keeping the shooting percentage high as they finished off the game.

Shutting down the Hawks seemed like an easy thing for the Liberty Flames to do, and they credit their success to having a team that has played together for years.  Nevertheless, the new players feel included.  Truter said that this team has shown her the ropes and encouraged her in this season already.

“My teammates are great,” Truter said.  “They have really helped me.  I’m excited to get to know them better as the season goes on.  Hopefully, we can grow stronger so we can go to nationals and experience that.”

Coming off of last season’s win at nationals, the team says that nationals is the goal. However, it is not their main focus right now, as the season has only just begun. The Flames are taking it one game at a time in order to shoot for success.

“It’s a long season,” Lowes said.  “We have a point where we want to be, and our job is to continually take steps to get there.”

“In the end, it’s going to be who wants it the most,” Bradford said.

The Flames Women’s Hockey team faces the Washington Pride in the next matchup on Sep. 7 in the LaHaye Ice Center.