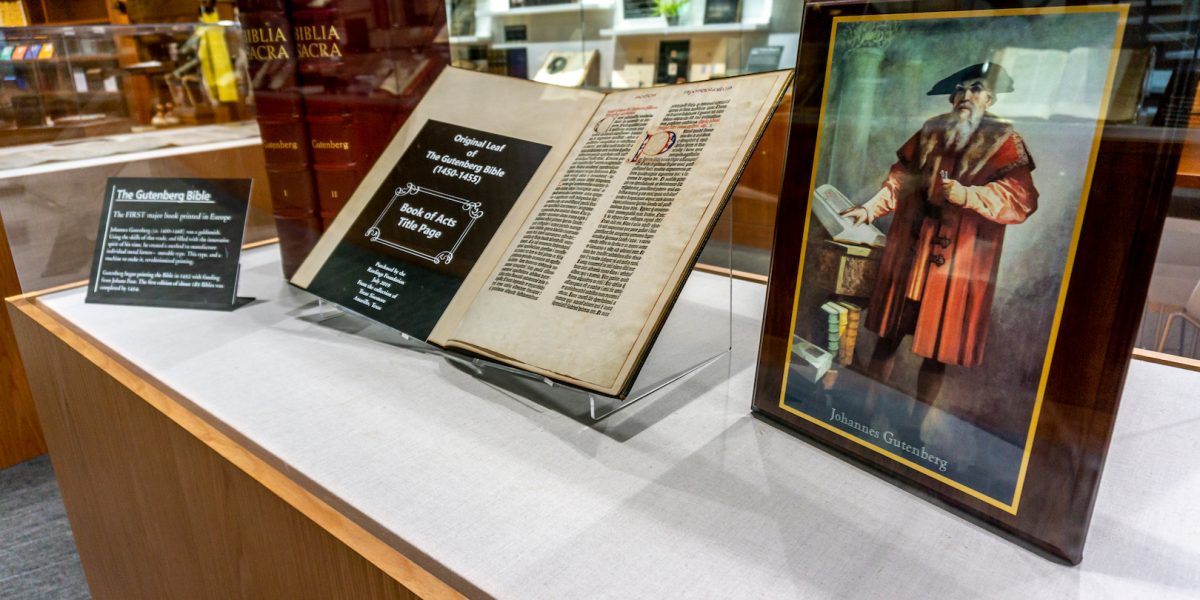 Liberty’s Scriptorium in the Rawlings School of Divinity received a new addition this summer: a leaf out of an original Gutenberg Bible.

The artifact is the title page of the Book of Acts and is located near the center of the Scriptorium and showcased in a glass display. The page was purchased from a private collector from Texas. The Rawlings family bought the page with hopes of displaying it on campus.

The page was installed in July 2019. With it came the prestige of having an original page from one of the most valuable Bibles in the world displayed on campus.

Gene Albert, a curator at the Scriptorium, said the page was “one of the top things you want to be collecting when you collect rare Bibles.”

The Gutenberg Bible was the first printed book and printed Bible ever made.

There are only 14 Gutenberg Bibles in America today, one of which is displayed in the Library of Congress in Washington, D.C., Albert said. Other locations include Harvard, Yale and Princeton. Only 49 Gutenberg Bibles exist in the world.

Written in archaic Latin, the page was produced in 1455 using the printing press invented by Johann Gutenberg.

At the time of production, Catholicism was the primary religion in Europe and Latin was the church’s language for a thousand years.

“Only highly educated, wealthy people and people in the church could read Latin,” Albert said. “The common person didn’t even know Latin (during that) period of time.”

Gutenberg’s printing press made literacy a much more feasible possibility for the middle and lower classes of the day. It opened the doors for mass production of books and reading materials.

“Before the Gutenberg press … all (Bibles) had to be copied by scribes by hand,” Albert said. “It would take a year (or a) year and a half for a scribe to copy a Bible.”

The new addition’s historical and emotional significance is not lost on Albert. He’s grateful Liberty can house an artifact so precious to the Christian faith.

“It’s one of the top things you want to be collecting when you’re talking about rare Bibles,” Albert said. “It’s the apex.”

The Scriptorium also features a life-sized version of the Gutenberg press. The original page expands the collection of sacred text

The Scriptorium features a number of rare books and Bibles made available by the Rawlings Foundation. The exhibit’s sacred texts are valued at over $1 million. Interactive multimedia screens help students research particular sections of the books and ancient texts.

In the mid-1400s the Gutenberg press made it possible for printed materials — including the Bible — to become available to the masses.