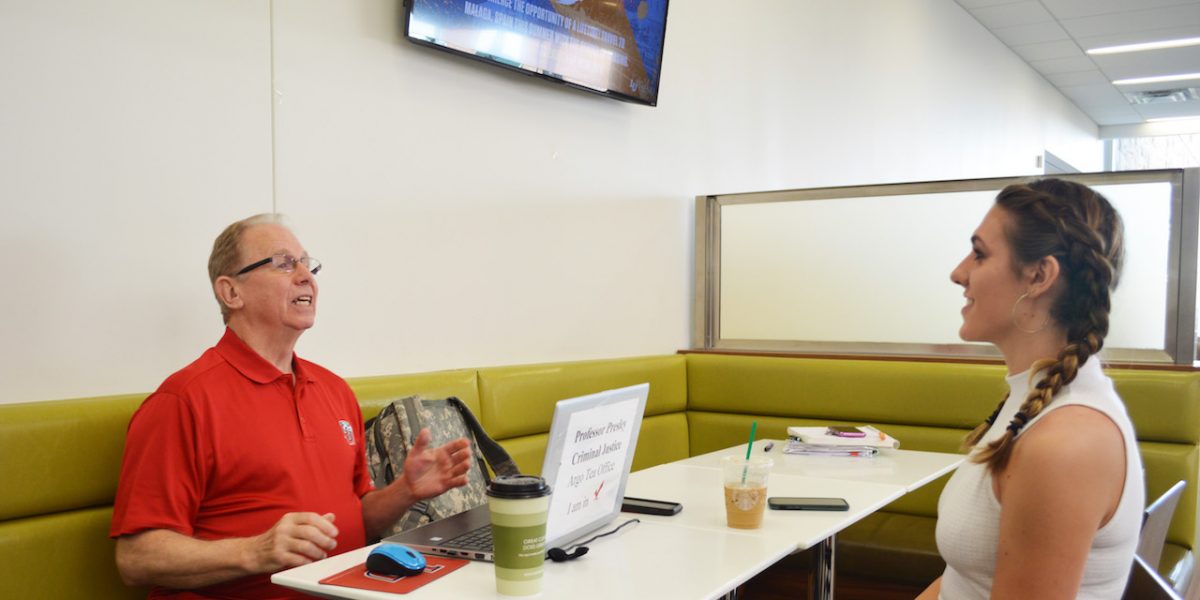 Every Monday, Wednesday and Friday, Assistant Professor Larry Presley is not in his office.

Rather, he is sitting in Argo Tea. On the back of his laptop reads “Professor Presley, Criminal Justice, Argo Tea Office: I am in.”

Presley’s office is located in Green Hall, but all of his criminal justice classes are held in DeMoss. Rather than make his students hop on the bus to Green Hall, he sets up his makeshift office in Argo Tea.

Convenience is not the only plus to Presley’s office arrangement. Students of all majors come by and greet him or ask questions. He even meets with visiting students and parents, using Argo as a central location to direct visitors to the best places to see on campus.

“It doesn’t matter if (Presley’s) grading or reading articles, he’s always available to talk to students. I think that’s a very unique quality in a professor. He clearly values the students.”

With Harmon’s second round of taking Criminal Justice 200, he was glad he had Presley as his professor.

“I literally passed Criminal Justice 200 because of him,” Harmon said.

If students missed an assignment, Presley replied with “email me.” He never gave points that students did not earn, but he allowed struggling students to make up work.

There is one thing that Presley said that has stuck with Harmon.

“(Presley) said ‘God has extended so much grace to me, I can’t, with a good conscience, fail to extend that to my students,’” Harmon said. “It was very refreshing to have that perspective from a professor.”

Before coming to Liberty, Presley worked for NYPD and FBI. He was the FBI forensic DNA analyst who helped investigate the 1993 World Trade Center bombing.

During his time at FBI, there was one case that is still highlighted in Presley’s mind. In that case, he testified against two men who brutally raped and murdered a young woman.

He ate lunch with the woman’s parents and prosecutor over the course of nine days that he testified in the case. The tension was  high in the courtroom, and the defense attorney was harassing him with questions. At one point, the defense attorney asked a silly question, according to Presley, to which Presley replied with a silly but logical answer.

Even the parents of the victim laughed.

According to Presley, the prosecutor expressed his appreciation afterwards for answering the question the way he did, allowing everyone in the courtroom to relax for a minute, but he promised the prosecutor that he would not make a comment like that again.

“You know (that) you’ve done justice when both sides thank you for what you’ve done,” Presley said.

Both the prosecution and defense attorney expressed their gratitude for Presley’s testimony in the case.

Presley’s passion for criminal justice shines through in his teaching. He occasionally tells stories of his experiences and encourages his students to stand up for truth. According to Presley, becoming a professor at Liberty was not his call, but God’s call.

“God made that decision. …I didn’t plan on it. … I believe God’s hand moved me into various positions, knowing he wanted me to end up here,” Presley said.

He considers it his calling to train up champions for Christ.

“It has been a privilege and honor to serve the students of Liberty University,”
Presley said.