Most students are unaware that Liberty University has a table tennis team. Not only does the school have a team, but they have participated in the regional National Collegiate Table Tennis Association (NCTTA) tournament, as well as the NCTTA National Championship two years in a row with this being their third season as a team.

“Right now we do not even have an official place to practice,” top player Messanh Ameduite said. “We just have one small room in the gym for recreation players.”

The Liberty University table tennis team is a part of the NCTTA which is the NCAA of table tennis. It is the highest level of table tennis for colleges in both the United States and Canada. It includes many players that have played and won medals in the Olympic games for table tennis.

Liberty’s table tennis team operates under the SGA clubs on campus. The team consists of 25 players, which is further broken down into three coed teams (A, B and C team) as well as a women’s team.

The team participates in two tournaments a year where they play other Virginia schools. The first tournament was in November of 2016 and the second was in February of this year.

Liberty made strides in the first tournament this season where the Liberty A-team beat Christopher Newport University (CNU) with a score of 3-1 and University of Virginia (UVA), 3-2.

Liberty did not meet its expectations in the second tournament as the A-team lost 0-4 to UVA, 1-3 against VCU, and 2-3 against CNU. However, Ameduite had success in the singles competition winning five matches. Ameduite beat Junda An, who was part of William and Mary’s A-team that went as a team to nationals.

“We did not quite do well enough to go to regionals as a team, but I think we will be competitive every year,” Liberty table tennis coach Steve Kilpatrick said. “The club sports director is really impressed with that — that we can go to NCTTA and we compete and send players to nationals. We just started and we already have players at a high level. That is going to allow us to recruit.”

Ameduite is a second-year medical student who competed in both tournaments and placed high enough to be selected to go to the regional tournament where he advanced to the semifinal. Even though he lost, he had enough wins to qualify
for nationals.

“I had a coach when I was in Africa and at that time I was playing full-time,” Ameduite said. “Since I came to the States, I have not had a coach and have not had any professional training. I just make it up somehow. I stopped playing for about eight years. I just picked it up (again) within the past
couple years.”

This year, the NCTTA Nationals took place in Eau Claire, Wisconsin. Ameduite and Kilpatrick traveled out there but due to flight delays did not arrive until the morning of the championship.

“It is tough at nationals because you have players that other schools invest in them,” Ameduite said. “They have coaches, they have practice, so it is a tough level of play. At this level, it is different.”

“Schools like Texas Wesleyan have tough players,” Ameduite said. “They practice every day for two hours. We know we can get there — it is possible.”

In order for Liberty to get to the level of some of these schools, it comes down to equipment and space for practicing.

“For this level of play, you cannot practice in a little room. Plus, we have 25 students on the team so it has been difficult,” Kilpatrick, who is also a Liberty physics professor, said. 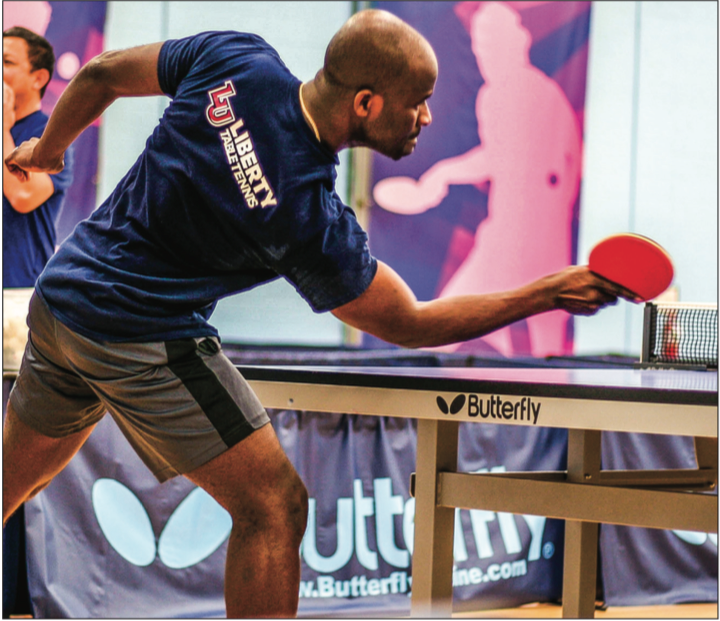 Because of these setbacks, Kilpatrick is trying to get the word out about the team and its success.

“It is hard to get the word out because it is not really advertised on the Liberty sports page,” Kilpatrick said. “Gradually we are trying to get our students to link with
other students.”

In the NCTTA, there are no rules against players being in the online program, so Kilpatrick recently reached out to the online students in hopes of finding table tennis players within the 80,000 students that study online.

There also has been talk of moving the table tennis team into an official club sport.

“Hopefully, once we become a club sport, it will be easier to get funding and to get equipment,” Ameduite said. “My goal for next year is to implement more practice time on the schedule, get some equipment and stay focused.”

Copeland  is a sports reporter.