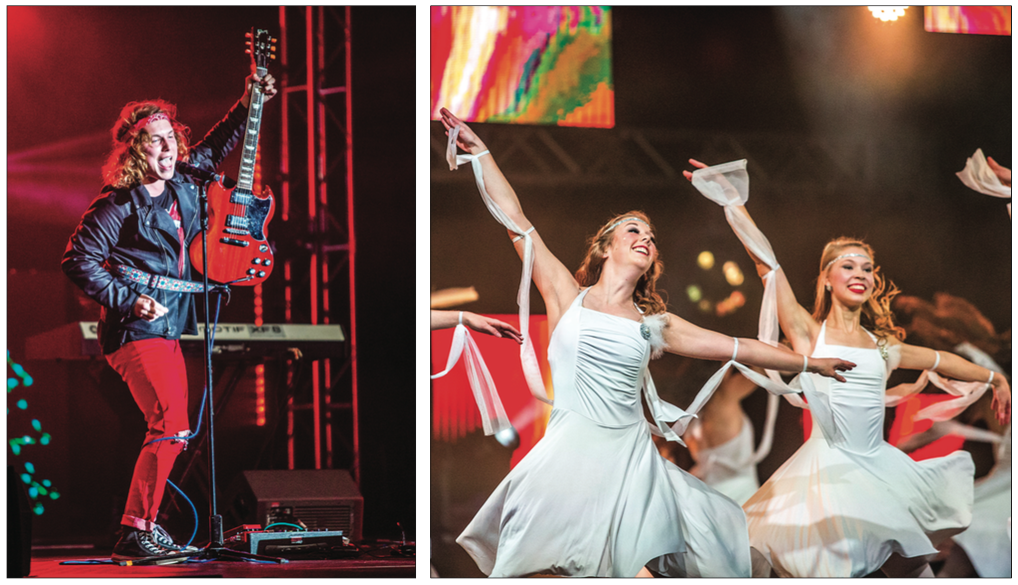 The night of Dec. 3 saw the Liberty University Vines Center packed out for the annual Christmas Coffeehouse. This year in particular, Student Activities decided to focus on the joy of opening presents on Christmas morning with its “Unwrapped” theme.

“Each semester we find new ways to change Coffeehouse and are always trying new things, from concourse decorations to stage sets and diverse acts,” Student Activities di- rector Stephanie Ward said. “The theme is ‘Christmas Coffeehouse: Unwrapped.’ The excitement of Christmas morning and un- wrapping presents is unlike any other feel- ing. We wanted to hone in on that and focus on presents this year.”

IN THE SPOTLIGHT — Jake Ziegler and the Locals (left) and Divine Call (right) performed at Christmas Coffeehouse Dec. 3 in front of an overflowing student audience at the Vines Center. Photo credit: Michela Diddle

Over the past several weeks, students have had the opportunity to prepare songs, videos and dance performances to present to an audience that has grown since the first Coffeehouse.

“Coffeehouse began almost 25 years ago as a small talent show that brought together a couple hundred students,” Ward said. “Over the years, the event grew and grew to what you see today with over 8,000 in attendance.”

The event was bookended by performances from Jake Ziegler and the Locals and D-Trex, respectively. In between the two acts were a mix of bands, dance troops, acappella groups and videos.

“There are 15 acts and seven submitted videos in this show,” Ward said. “The talent at Liberty is impeccable. We have seen so many incredible performers at Coffeehouse, and this show (is) no different.”

Throughout the night, Student Activities used the hashtag #SACoffeehouse to promote giveaways and dialogue with students. The Undecided Majors, the Vegan Llamas and Up To Snow Good performed in between student-made videos such as “Manger Things,” a Christmas parody of the show “Stranger Things.”

Among the acts and videos of the night, attendees were the first to hear the theme for next semester’s Spring Coffeehouse, an announcement that is usually saved for spring semester.

“We thought it had been a while since we did a decade,” Coffeehouse host, Heath Hat- maker said. “So what we have decided is next semester’s Coffeehouse is going to be ‘
Coffeehouse: The 2000s.’”

“Christmas Coffeehouse has been a great experience ever since I’ve been here,” Cassell said. “I’m really glad that I chose this school to come to because of things like (Coffeehouse) and Christmas Convocation. This being my last one was sentimental, (and) I’m glad I got to go.”

Student Activities has a lot planned for the student body for the remainder of the school year with open mic nights, concerts and free movies. Even with all that is planned,
Coffeehouse will continue its tradition, which according to Ward is a worthwhile event for the Student Activities staff.

“Coffeehouse is such a rewarding event for us,” Ward said. “Not only does so much work go into the back end, but I’m always so impressed with the student body. From the guests in attendance to those on stage, we’re so thankful for a family that celebrates all the talent Liberty has to offer. Liberty makes this event everything it is.”

FRATICELLI is a feature reporter.