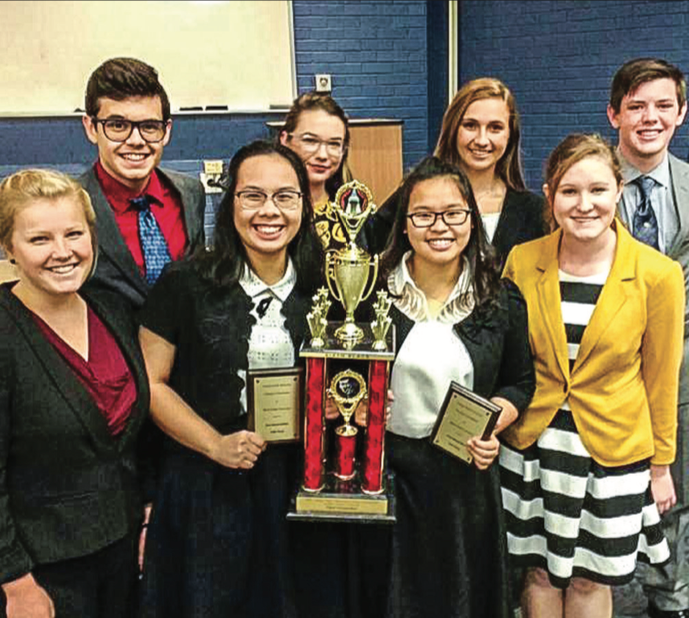 At Liberty University, “forensics” does not look like its crime-drama television counterpart.

Forensics refers to public speaking and performance and can be a powerful communication tool.

She knows firsthand how forensics can aid those who apply it to their lives.

“Forensics generates many positive benefits for its participants,” Thomas said.

“Among them are the development of communication and critical thinking skills. It facilitates valuable relationships and personal growth, and it prepares students for the job market.”

Made up of 21 members, including 11 new members, the forensics team travels across the country representing Liberty in tournaments consisting of oral interpretation, platform presentation, and limited preparation periods.

With each event and opportunity, the team members get a chance to expand their communication skills and receive chances to express their passions, which are two of the main incentives of being a part of the team for sophomore Lindsey Ball.

“It’s not a lot of fluff,” Ball said. “It’s hard work, and it’s plenty of effort, and I enjoy that about it. I can talk about the things that I’m passionate about, and I get whatever work I put into it.”

Sophomore Britta Hare, who was last year’s most awarded member, shares the same enthusiasm for forensics as Ball.

Hare also attributed her improvements in both professionalism and public speaking — as well as the encouragement of her welcoming teammates — to her time spent with the team’s coaches.

Majoring in individualized studies with a focus in global studies, Hare found that forensics has helped enhance her ability to convey the stories of Jesus.

“The most helpful thing is that, through forensics, I have become a better storyteller,” Hare said.

“I basically just want to spend my life telling people about Jesus, which is all about interpersonal relationships and storytelling.”

The forensics team itself has not been around the school for very long, though evangelism and effective communication has long been one of the university’s staples.

According to Thomas, at the request of Jerry Falwell Sr. in the 1980s, Dr. Cecil Kramer founded a speech and debate program for Liberty.

As the debate section grew increasingly successful, the competitive speech element of the program was removed.

However, in 2009, the forensics program was revived in response to student interest.

Last year’s team came into the school year with no returning members and only a few students with experience.

However, their hard work earned them 39 individual awards and four team awards in nine tournaments, according to Thomas.

“The inexperience of the team was offset by their passion and work ethic, allowing them to grow and succeed beyond expectations,” Thomas said.

As for the new school year, the team has already accumulated four individual and one team award following their first tournament.

With its 10 veteran members, the team looks to improve on their previous accomplishments, and Ball extended encouragement for anyone who may be interested in joining forensics in the future.

“Whether you’ve never done speech before or you’ve been doing it for eight years, come to the team because the coaches will meet you where you are and will take your skills and weaknesses and use them for your benefit and the advantage of the team,” Ball said.

KLINKER is a feature reporter.