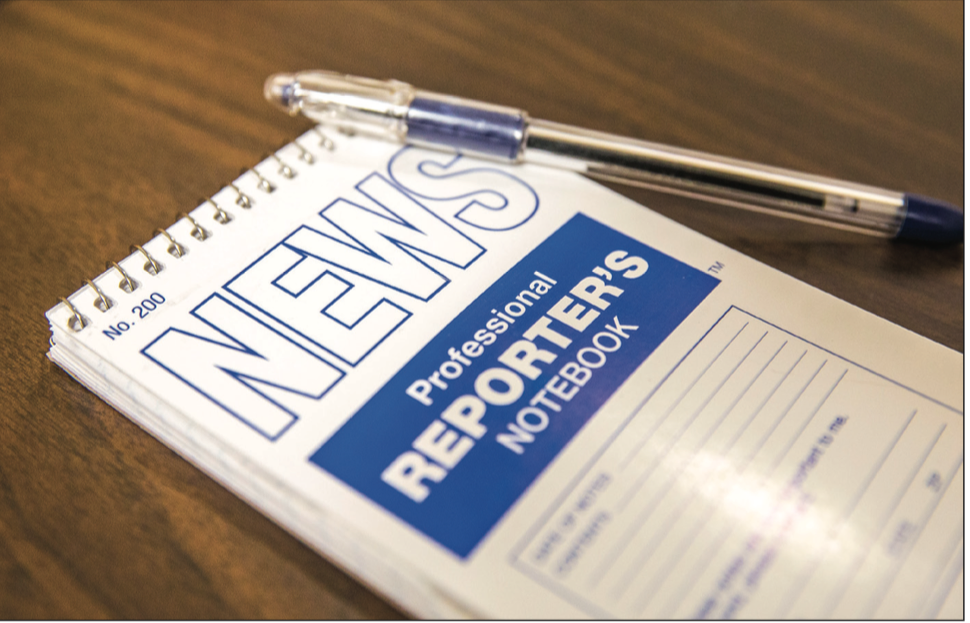 The job of journalists grows more difficult amidst doubt

BIAS — Public perception of the news has taken a hit with concerns of partisanship.
Photo Credit: Michela Diddle

In September, I had the great privilege of attending a Donald Trump rally in Roanoke, Virginia as a member of the press.

It was my first time attending such a prominent event, and as I stood in line to get my media pass, I could not think of a time before when I was so enthusiastic about being a part of the press.

Trump’s rally speech was rife with catchy one-liners, big ideas and was constantly complimented with a hammering applause.

To me, the dialogue blended together up until the point Michael Flynn pointed his finger to the back of the room and criticized the press as biased and distorters of the truth, just as he has done in past speeches.

It was at this point in the speech that the majority of the attendees at the rally turned around and booed at those in the press box just as they would if Hillary Clinton herself were in the room.

It was not the booing that got under my skin, but rather the stark realization that journalists are some of the most disliked people in a nation where freedom of the press is held so highly.

In a Gallup poll, for example, 55 percent of respondents said they have little or no trust in the media to be unbiased and fair.

Of course, I knew this beforehand.

One can only go through journalism school for so long before he or she realizes they are receiving a degree in “professional lying,” as I have heard before.

The booing at the rally was more of a wake-up call: This is for real.

Here I am thinking, “What did I get myself into?”

The problem, though, lies in the fact that these people have negative perceptions of the media for no good reason.

Of course there are those in the media who are biased, as that will always be the case.

There are those journalists that plagiarize, fabricate and lie.

In a field of work that values the truth highly, those are unacceptable, but they are not the case for the majority of journalists.

Rather, the populous on both sides of the aisle have turned to blaming the media, not because they have proof, but because it is an easy way out.

It is a lot easier to say the media is lying about the polls than to accept that your preferred candidate is losing.

It is easier to say the media is making up facts that disprove your argument than to accept that you are wrong.

It is easier to stamp a “biased” sticker on media outlets as an excuse to not take anything they say into consideration.

It is easier to do all of those things because people are afraid to have their beliefs put in question.

Instead of reading and watching the news through an objective lens, people will switch off when they hear something they do not want to.

The result is an American population that is uneducated and ignorant to those ideas that are not their own.

The purpose of the media – to inform – is becoming drowned out.

People will not listen to and learn from a well-written, fact-oriented news article.

Instead, they will claim with no evidence that the event ever happened, and the facts are made up.

This is not to say media outlets cannot be biased.

One only needs to watch a single clip from Bill O’Reilly’s show to realize he leans to the right, just as Rachel Maddow leans to the left.

The public should be smart enough, however, to separate fact from fiction when watching the news or reading the paper.

It is the public’s job to decipher the news just as it is the reporter’s job to provide it. 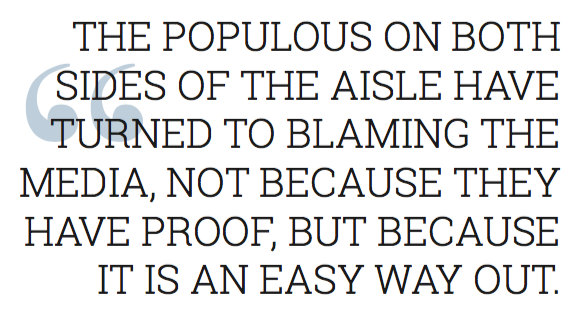 The fact that some journalists are biased does not give the public an excuse to stop consuming the news altogether and crawl under a rock.

Instead, it should be viewed as the public’s duty in a democracy to read news from multiple outlets in order to stay informed and find what truth they believe about the world and how it works.

So please, pick up a copy of The New York Times or Wall Street Journal and actually read it.

It is time to stop blaming the media as the problem when it is the ignorance of the masses that has propelled society into more problems than it can count.

The author refused to reveal which candidate he is supporting for president.

ShareTweet
tagged with difficult amidst doubt, Media mistrust, The job of journalists