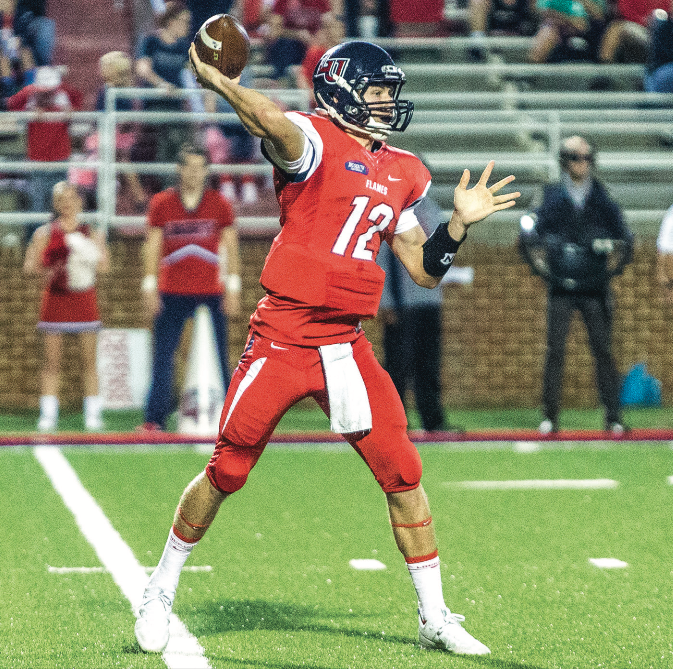 Buckshot leads the Flames to 41-7 victory over RMU

Just a week prior, a dejected Liberty Flames football team left the field after suffering a blowout loss verses the No. 3 FCS team in the nation, Jacksonville State (JSU). 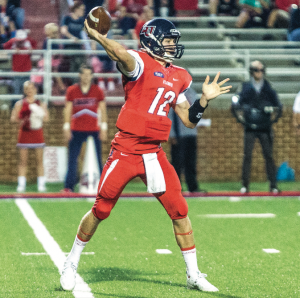 With a subpar 1-3 record, uncertainty regarding the quarterback position, and a glaring bruise from JSU’s proverbial punch to the gut, the Flames could not afford to drop their final home non-conference game of the season against the Robert Morris University (RMU) Colonials (1-4).

With the threat of a 1-4 record looming over their heads, Wells and his Liberty Flames dominated the Colonials in a 41-7 routing at Williams Stadium, Oct. 1.

Both teams did little with their opening drives, as each resulted in quick three-and-outs.

Despite the slow offensive start, it was the Colonials who drew blood first.

After leading his offense to Liberty’s 2-yard line, Romanchak capped off the drive with a 2-yard dart to his freshman fullback, Blake Skuratowicz.

Down seven, it became freshman quarterback Buckshot Calvert’s turn to lead an offense in a scoring drive.

After two drives that failed to result in a single first down, Liberty moved the chains for the first time with five minutes remaining in the first quarter after a 1-yard carry on third and short from junior running back Carrington Mosley.

A pass interference call against the Colonials moved the Flames to midfield.

But the penalty called just two plays later would have an impact of a much larger magnitude.

After a Mosley rush moved the Flames just past the 50-yard line, Calvert lofted a pass to a wide-open junior receiver Marcus Fitzgerald for a gain of 30 yards.

Fitzgerald was open due to RMU redshirt senior defensive back Marcelis Branch leaving his man to help cover the slot receiver, whom Branch thought Calvert was aiming for.

But in the process, Branch was flagged for targeting which resulted in the Flames moving half of the distance to the goal closer, and subsequently Branch’s ejection.

“(Branch) is a good player,” Gill said. “The referees made the call. (I) don’t like anybody getting out of the game. I don’t care if it’s one of our guys or one of the opponents.”

Immediately after the large gain, the Colonials were called for another penalty — offside — pushing Calvert’s unit even closer to RMU’s endzone.

With the Flames first goal-to-go situation of the game, it found itself with the most opportune chance to tie the game. And while it took them all four plays, the Flames did just that.

Liberty was set in its goaline formation on fourth down at the 1-yard line.

The Colonials looked to respond. Wells continued to bulldoze his way through the Flames front seven. 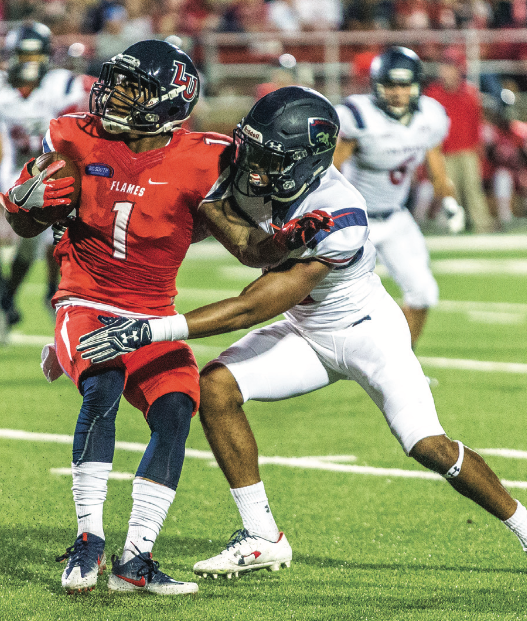 His contribution paired with a 21-yard connection between Romanchak and Skuratowicz placed the Colonials in Flames territory just as the first quarter concluded.

At the start of the second quarter, an in-rhythm Romanchak found freshman receiver Tim Veccio for a short gain, but a roughing the passer penalty against the Flames tacked on an extra 15 yards, putting the Colonials in the redzone.

With both momentum and the ball moving in the Colonials favor, RMU’s freshman signal caller set up shop with five wideouts at the 18-yard line.

Romanchak went for the touchdown as he set his sights for a receiver bolting toward the corner of the endzone.

He released the ball, but senior strong safety Alpha Jalloh snagged the ball out of air for the interception. With that turnover, the momentum along with possession of the ball shifted into Flames favor.

After a series of small gains, a roughing the passer call moved the Flames further into RMU territory.

Akin to the previous scoring drive for the Flames, Calvert found freshman receiver Antonio Gandy-Golden who scampered into the endzone for the 14-yard touchdown completion.

With a one-score lead, the ball and a bit of momentum, Gill let his freshman quarterback loose.

On the very first play of the ensuing drive, Calvert uncorked a long ball to senior receiver Dante Shells for a 69-yard touchdown, increasing the lead to 21-7.

The score remained that way until halftime. Once the second half commenced, it soon changed when Romanchak was picked off by junior safety Solomon McGinty who jumped the route and ran it in for a pick-six.

Liberty would proceed to add two field goals and a fourth passing touchdown from Calvert, who set the record for first-time starting freshman quarterback passing yards in a game (340).

“(I’m) proud of (Calvert),” Gill said. “He has a very accurate arm, and he showed that. He made some good throws and took care of the ball.”

The Flames exited Williams Stadium with a 34-point victory and a bit of that confidence somewhat lost after falling to Jacksonville State only one week earlier.

“(I’m) very proud of the way our coaching staff and our players responded after last week,” Gill said.
The Flames next matchup will be their first conference game of the season, as they face off against the Kennesaw State Owls, Oct. 15 at 7 p.m.

Haywood is the graduate assistant.