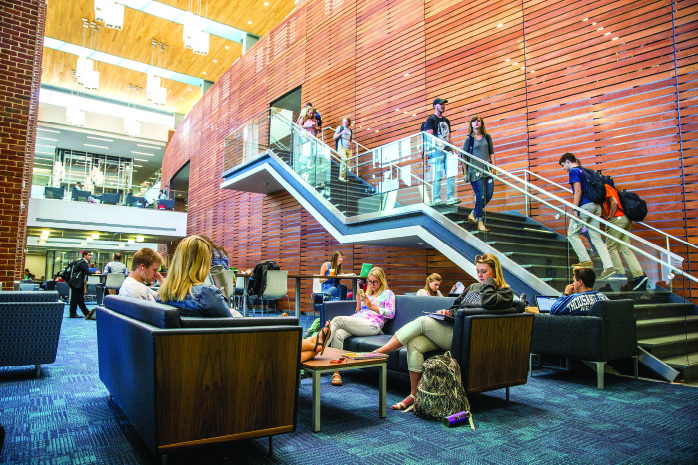 The Montview Student Union and a new 1,600-seat concert hall mark the latest additions to Liberty University’s campus as both are now completed and open for Liberty students, faculty and staff in preparation for the fall 2016 semester.

The student center, located in central campus and attached to the backside of DeMoss Hall, is four stories high and spreads across a 168,000-square-foot area that allows it to house six new dining venues, gaming areas and a bowling alley available for students.

The exterior of the building showcases a grand staircase designed to hold large events including concerts and future commencement ceremonies.

Though some academic opportunities are available in the student union, Liberty’s Planning and Construction Coordinator Brad Butler said most rooms and spaces were built to house student-run clubs and serve as a space for students to take a break from classwork.

“We wanted to maximize the opportunities for students to not only stay on campus, but to enjoy and thrive on campus,” Butler said. “So this building was built strictly with the students in mind.”

Spaces in the student center such as the ballroom and various multi-purpose rooms do not have a designated purpose, but instead were meant to host multiple events for students and guests of the university throughout the year.

The six dining locations located within the building — Argo Tea, UFood Grill, The Grid Marketplace, Garbanzo, Woodfire Pizza and Star Ginger — are on the first floor, and residential students with the PLUS+ dining plan can use PLUS+ meal swipes at all six locations, according to Associate Vice President of Auxiliary Services Louis Cambeletta.

“The new dining options are going to give (the students) so many more options than before and really expand this side of campus,” Cambeletta said. “Because the classrooms are located really close in DeMoss, students are now able to get quicker meals between classes and do not have to walk longer to the dining hall.”

The second floor of the student union includes a gaming area with billiards, table tennis and various gaming consoles, while meeting rooms for clubs and the new headquarters for Liberty’s Student Government Association can be found on the third floor.

Though the interior of the building is fully completed, a pedestrian bridge that can currently be used for emergency purposes is being built on the north side of the building to connect it to the Freedom Tower, which is currently being constructed adjacent to the student union.

Across the lawn on the west side of the student center is the Center for Music and Worship Arts, which on Sept. 1 officially opened a state-of-the-art fine arts concert hall that is attached to the educational wing of the building, originally completed in fall 2015.

The concert hall — which has not been given an official name yet — includes several notable features such as an orchestra pit lift, a choir loft and a Myers Constellation acoustic system located on the ceiling that can raise and lower to and adjust the room’s acoustics depending on the type of event being hosted.

“The sound system here is so incredibly complex,” Butler said. “In terms of technology, this building is in a league of its own.”

Although currently open for usage, the concert hall will not be completely finished until Nov. 1 due to the sound system needing several weeks to be correctly tuned.

Christmas on the Boulevard — a musical production that incorporates music from the school of music’s choir and the Liberty University Symphony Orchestra — is the first major production set to be hosted in the concert hall.

Throughout the entire school of music, the walls were constructed with a “box-in-box” design for soundproofing reasons.

The design requires that two separate walls are built next to each other and connected with steel bars and drywall to create a single wall.

“You’ve got a train track literally about 100 yards away from (the school of music), and when it comes by, you can scarcely hear it because of the type of glass used and the construction of the exterior walls,” Butler said. “The designers were very intentional in trying to reduce outside sounds to help the people performing.”

The Center for Music Arts and Worship also features viewing balconies for every classroom and includes multiple recital rooms and songwriting labs that students can use at their leisure.

According to Butler, the project has helped send admissions up for worship and recording arts majors.

“It’s crazy to see how much it has changed,” third-year music student Kara Witt said. “When I first came here, the school of music was still in the dorms on the Circle. It’s so different now, but now that we have this new building, we all feel really blessed from students to faculty to staff.”