To punish or not to punish? 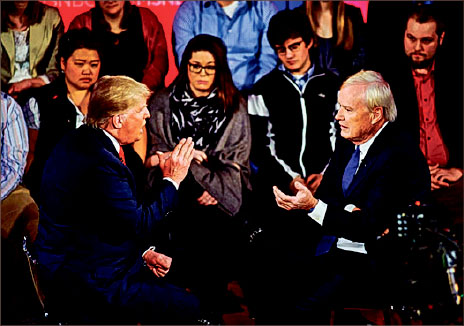 Donald Trump’s worst period in his campaign for the Republican nomination came Tuesday, April 5. Trump lost by a significant margin in the Wisconsin primary to Ted Cruz, making it even more difficult for him to reach the 1,237 delegate majority he needs to become the nominee.

Abortion — In an MSNBC town hall, businessman Donald Trump called for punishing women who have
abortions. He later retracted his statement. Google Images

One of the most controversial and damaging moments during this period for Trump came at a town hall interview with MSNBC’s Chris Matthews. In a discussion on the topic of abortion and its enforcement, Matthews asked Trump that if abortions were made illegal, whether he believed that a woman should be punished for an illegal abortion. Trump, clearly looking perplexed, answered, “The answer is that — there has to be some form of punishment.”

Trump would eventually change his stance on this issue but not before many expressed outrage over the idea of punishing a woman who has an abortion. Writers, like Anna Quindlen of Newsweek, posited that this displays the inconsistencies of the pro-life argument.

“There are only two logical choices: hold women accountable for a criminal act by sending them to prison, or refuse to criminalize the act in the first place,” Quindlen writes.

Yet Quindlen is creating a false dichotomy that is not consistent with the history of the pro-life argument. Pro-life supporters have never argued for the punishment of the woman who has had the abortion, like Trump stated. The focus has always been on the physician administering the abortion.

“None of the laws overturned by Roe v. Wade (that is, the abortion laws of every state) treated the woman as a criminal,” Dellapenna writes.

Even in the post-Roe era, abortion laws have never punished the woman. In the same National Review symposium, Dorinda Bordlee of the Bioethics Defense Fund supports this argument.

“Abortion bans with post-Roe activation clauses … explicitly state: ‘Nothing in this section may be construed to subject the pregnant mother upon whom any abortion is performed or attempted to any criminal conviction
and penalty,’” Bordlee wrote.

This discussion of whether or not there should be some form of punishment for the woman who has had an abortion distracts from the real issue behind the pro-life movement. The fight against abortion should be focused on the life of the baby in the womb and convincing mothers that the best path is to bring their baby into the world. It is not focused on some sort of crude vengeance against anyone who was involved in the abortion process.

“Being pro-life means wanting what is best for the mother and the baby,” Jeanne Mancini, president of the March for Life Education and Defense Fund, said in a statement. “Women who choose abortion often do so in desperation and then deeply regret such a decision. No pro-lifer would ever want to punish a woman who has chosen abortion.”

This is not saying that there should be no form of criminal punishment for abortions. The legal precedent has always focused on punishing the physician who performed the abortion, and not seeking to prosecute the “accomplice,” the woman.

“The almost uniform state policy before Roe was that abortion laws targeted abortionists, not women,” Clarke D. Forsythe, Americans United for Life senior counsel, wrote. “The states expressly treated women as the second ‘victim’ of abortion; state courts expressly called the woman a second ‘victim.’ Abortionists were the exclusive target of the law.”

In a country that is continually embracing abortions as moral, pro-life Christians should be fighting for the rights of the baby inside the womb and seeking to minister to those women who are thinking about or have had an abortion. We cannot become distracted with enacting vengeance.