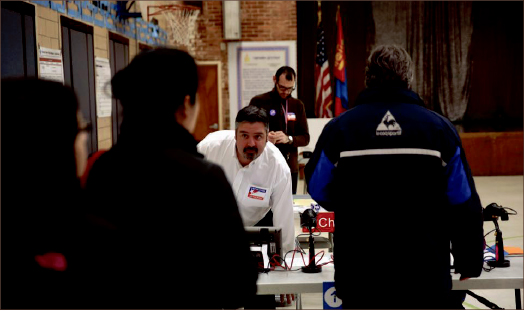 If the craziness of the first day of the NCAA tournament had any comparison, it would be Super Tuesday. Eleven states voted Tuesday, March 1, including Virginia, and a total 1,460 delegates were up for grabs. This is every political junkie’s favorite night.

Voting — Eleven states across the country voted on Super Tuesday, March 1, and 1,460 delegates were handed out to candidates. Google Images

Virginia was one of the many hotly contested primaries of the night. Businessman Donald Trump won the state with 34 percent of the vote, followed by Sen. Marco Rubio with 31 percent and Sen. Ted Cruz in a distant third with 16 percent, according to the Virginia Department of Elections.

Rubio won the D.C. suburbs in Northern Virginia and was also the leading candidate at the Vines Center precinct at Liberty University. Students showed up in droves to vote for their preferred candidate, and the turnout for this year’s primary was double that of the turnout for the 2012 primary, according to Larry Provost of the Division of the Student Affairs.

Rubio received 43 percent of the vote among students, followed by Cruz with 32 percent, Dr. Ben Carson with 13 percent and Trump with 7 percent.

Liberty President Jerry Falwell tweeted after the results from the Virginia primary came in.

“Proud of @LibertyU students for voting their conscience today and thinking for themselves unlike those at many univ who blindly follow admin,” Falwell wrote.

It is hard to say who the winner of the night was. While Trump won the most states, he did not meet the expectations many had for him. Cruz may have been the true victor of the night, winning his home state of Texas handily and surprising everyone with a win in Oklahoma. Yet when you look at the big picture of the nomination process, Cruz needed to do much better in the SEC primaries than he did.

Despite the support he received from Liberty students, Rubio had a very poor night. He did win his first state in Minnesota; however, his failure to reach the threshold of 20 percent in Texas cost him valuable delegates. He was nearly 100 delegates behind Trump and Cruz coming out of Super Tuesday.

Maybe the most important takeaway from the night is the continued debate among Republicans about what the best way to take out Trump is. Some argue that clearing the field and allowing one candidate to go head to head with Trump is the best option. There have been many calls that Cruz should be that candidate after strong showings in the four primaries Saturday, March 5. Cruz won the Maine and Kansas primaries while Trump won the Kentucky and Louisiana primaries.

“In that case (Rubio winning Florida and Kasich winning Ohio), Trump still holds the delegate lead,” writes Mark Murray of NBC News. “But he needs to win 66 percent of remaining delegates to get to 1,237 — and that could be hard to climb.”

The March 15 primaries continue to grow in significance and may be the last stand against Trump becoming the Republican nominee, or it may be when he seals the deal for his nomination.