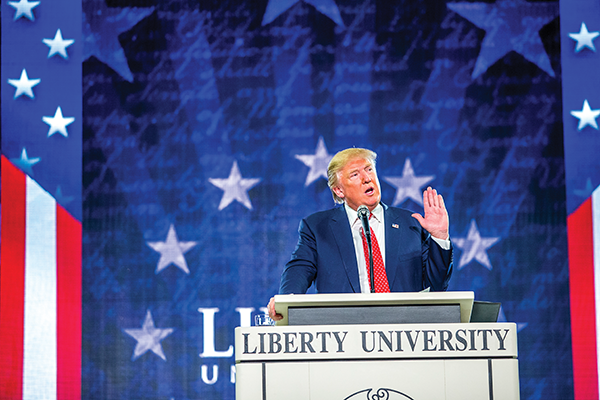 Record — Donald Trump returned for his second time at Liberty and spoke about how he plans to make America a great country again. Leah Seavers

Following the tribute to King, a third video recapped Trump’s rise through the ranks. At its conclusion, Nasser introduced President Falwell, who clarified that Trump’s presence was no indication of Liberty’s political affiliation and was not an endorsement.

Falwell proceeded to list kind and generous acts Trump committed over the recent years. He then added more background on the candidate, ultimately admitting he saw parallels between Trump, King, and Liberty founder Jerry Falwell Sr.

“He’s not a puppet on a string like many other candidates,” Falwell said after explaining how Trump was funding his own campaign.

“To be compared to his father is really an honor for me,” Trump said. “That’s the best compliment of them all.”

Falwell concluded his introduction and proceeded to invite Trump to the stage, where he was met with a resounding applause from the record-setting crowd, a feat which Trump dedicated to King.

“We broke the record,” Trump said. “The first thing I said to Jerry and Becki (Falwell) when I got here was, ‘Did we break the record?’ And they said, ‘Yes you did by quite a bit.’ So we’ll dedicate that to Martin Luther King Jr., a great man.”

Trump thanked Liberty for the opportunity to speak and then referenced his recent success in polls. Afterward, he
proclaimed his desire to “protect Christianity” and followed this claim with the Bible verse 2 Corinthians 3:17.

The presidential candidate returned to statistics of his ability to draw record crowds and claimed his desire to “take the country back” is fueling the “movement.”

Trump mentioned the issues potentially stemming with each Democratic candidate, including higher taxes and a
weaker military.

Throughout the remainder of the speech, he referenced policies and plans he had for this nation.

“I honestly think I can say… we’re going to make America great again,” Trump said. “Greater than ever before.”