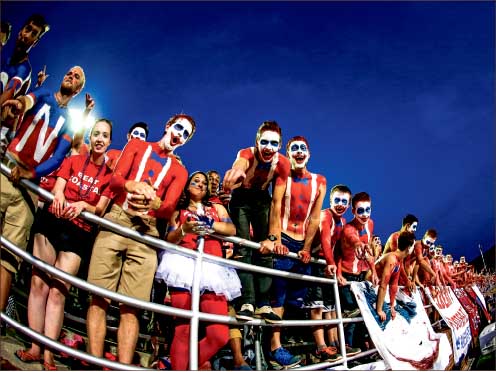 Joey Nickerson started the fanbase in the fall of 2011

Joey Nickerson stared at himself in the mirror of his residence hall room before a Liberty University football game back in 2011. He wondered what he could do to demonstrate his support for the team and cheer on the Flames.

Spirited — Jerry’s Jokers face paint includes a white base with a stretched red smile and a dark blue coat around the eyes. Photo credit: Leah Seavers

His answer now comes to life on the front rows of home football games, spanning all the way from the 30-yard line on one side of the field to the 35-yard line on the other half. It is sometimes close to 100 students, all packed on the first three rows, practically falling over the railing, waving Liberty flags, and screaming over top of the opposing team’s huddles. But those antics are not their most distinctive features.

Nickerson said he loosely based the idea off the Joker from the 2008 film “The Dark Knight.”

“We would do white first on the whole face, then the blue eyes, then the red mouth, and we ran paint through our hair,” Nickerson said.

In addition to their all-red bodies, Nickerson, then a junior, and the few other students who first joined him topped off their characters with a painted tie or bow tie and suspenders.
Keep it classy.

Nickerson said by the end of the season, almost everyone on his hall had joined — 30 or 40 students, calling themselves the Jokers, all rushing to get the seats right behind the opposing team’s bench. When Nickerson moved off campus for his senior year, he passed the torch off to BJ Cook, who was set to be a Resident Assistant (RA) on a hall the next year. Cook continued to encourage the fandom on his hall over the next two years, and it continued to grow. Two students on that year’s hall, Jesse Pausch, now a graduate student, and Josh Young, now a senior, earned RA positions on other halls the following year, so instead of just one hall painting up, it grew to three. This season, four halls, 25-1, 25-2, 25-3 and Commons I floor 5 all show up in large numbers, with students from other halls welcome to jump in.

“It’s pretty crazy that it started with just this random idea as I was looking at my face in the mirror figuring out what I should do,” Nickerson said. “Now it’s something Liberty does at football games. It’s their thing now.”

The fan base now refers to themselves as Jerry’s Jokers, named after President Jerry Falwell in a convenient case of alliteration. Young took the helm when Cook graduated in May 2015 and now coordinates Jerry’s Jokers, getting new students on board. His first year, he experienced what he believes is one of the appeals in deciding to go all out for the games.

“Jerry’s Jokers is really how I made a lot of my friends,” Young said. “It was something we all did together. … It’s really tied into the community of (the hall).”

Young said Jerry’s Jokers have two main goals: cheer on the Flames and keep the opposing team from playing their best game.

“We just try to get loud (when Liberty is) on defense,” Young said. “That’s the biggest thing we try to do. The easiest thing that a crowd can do in terms of messing up (the opposing team) is making it hard for them to communicate on offense. That’s our biggest goal — to be really good fans and give Liberty a home field advantage.” 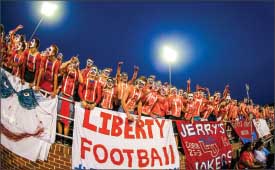 Their position right behind the opposing team’s sideline gives them ample opportunity to distract the team as much as possible over the course of four quarters. The players and coaches have no choice but to put up with whatever Jerry’s Jokers give them.

“A lot of the players you can distract better if you just have fun with them, so we like to joke around with them,” Young said. “It’s nothing that’s mean spirited but just stuff that’s going to get them and their teammates laughing at each other.”

One such tactic includes chanting for the opponent’s coach to the put in one of the backup players. During the game versus Presbyterian Nov. 7, chants of “Put Rob (Presbyterian’s backup offensive lineman) in!” echoed through their sections to the amusement of some of the offensive lineman’s teammates. Apparently it works sometimes, as Young said an opposing team’s backup quarterback once called them “the funniest fans he’s ever seen” and even became friends with some of the Jokers on Facebook afterward.

Although their seats are up close with the opponent, their true focus is on celebrating with the Flames. When Liberty scores a touchdown, the Jokers erupt with the rest of the stadium.
“It’s an absolute mosh pit,” Young said. “That’s one of my favorite things, when you get to see the guys go completely crazy. … It’s a fun way to celebrate.”

Seated high up on the other side of the stadium, the man they are named after has taken notice and encourages the fan base, saying he’s “very honored” to have his name attached to the group, even sometimes inviting them up to the president’s box during the game for a visit.

“Fan clubs like Jerry’s Jokers create a lasting impression on the student body and on the fans that endures for decades,” Falwell said. “They make the game day experience more exciting and more fun for all and that, in turn, increases attendance and support for the program.”

Win or lose, three full hours of screaming for their team at the top of their lungs does have some lingering effects. Their singing voices might not sound too good at church the next morning.

Clarke is a copy editor.