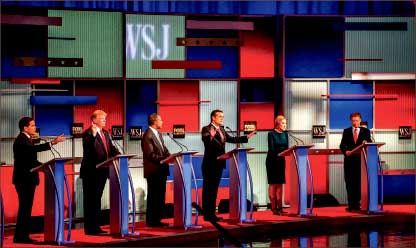 The Republicans held their fourth debate so far this election cycle Tuesday, Nov. 10. Coming off a controversial debate on CNBC, Fox Business made a strong effort to be much more policy focused while also taking some passive aggressive shots at CNBC in the days leading up to the debate. The questions were insightful and substantive, and a few candidates shined.

Over the last two debates, Sens. Marco Rubio and Ted Cruz have pulled ahead of the rest of the pack. They are both very good in short, thoughtful responses and have left both debates completely unscathed. Rubio was particularly impressive with his answer to raising the minimum wage.

“If I thought that raising the minimum wage was the best way to help people increase their pay I would be all for it, but it isn’t,” Rubio said.

This statement signifies what will make Rubio relatable to a large amount of the population in the general election. His remarks on the minimum wage do not smack of the “scratching my rich friend’s back” undertone many criticized previous Republican nominees of taking. It is a conservative stance stated in such a way that it does not drive away lower income and minority voters but points them toward a hopeful future.

Cruz was strong as well and was able to tap into the same anti-Washington, anti-establishment sentiment that Donald Trump has. The difference is Cruz is much more conservative and much more polished than Trump. Cruz also seems less scripted and much quicker on his feet than he was previously.

Sen. Rand Paul had a good debate as well. He seemed engaged and ready to fight and was able to distinguish himself from the rest of the field in both domestic and foreign policy. However, in light of the horrific attacks this past weekend in Paris, his “isolationist” foreign policy just does not seem feasible. As more and more terrorist attacks take place across the world, it does not seem responsible for the U.S. to slowly back out of world affairs.

The biggest loser of this debate may have been Ohio Gov. John Kasich. From the outset of the debate, Kasich was overly attacking, and he constantly complained about not getting more speaking time even though he finished with the second most time. Kasich got away from his positive, moderate mantra and seemed agitated and angry. He also lost an argument with Cruz over whether the government should bail out failing banks and was slammed by Trump early in the debate. An all-around poor night for him.

Finally, Jeb Bush had by far his best debate, which admittedly is not saying much, as his first three debate performances were very poor. Bush continues to be a weak debater and often reminds me of the stuttering lawyer in the classic movie “My Cousin Vinny.” The idea many have put forward, that Bush is rusty from not serving in a political office for almost a decade, seems to be reality.

The end result of this debate has kept the status quo. Rubio and Cruz are the rising stars while Dr. Ben Carson and Trump continue to hold fast in the polls. Yet all of this could change within a week. Many candidates have been in the spotlight and faded quickly. Originally, Bush and Gov. Scott Walker were the big names, and Walker is now out of the race completely while Bush has struggled almost since the moment he announced his campaign. Carly Fiorina made a big splash in the first two debates but has not garnered as much attention since then.

“Tuesday night did not radically alter the trajectory of the Republican race,” Charles Krauthammer concluded in The Washington Post. “But it will hasten the winnowing of the field.”