An impression of Israel 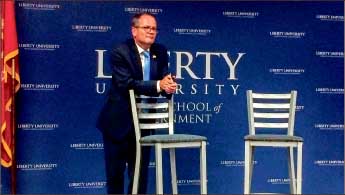 Ilan Sztulman, head of Public Diplomacy at the Israeli Embassy, spoke about Israeli diplomacy and the media’s role in the public’s view on Israel at a public forum hosted by Liberty University’s Stand With Israel Club Wednesday, Nov. 4.

Diplomat — Ilan Sztulman fielded questions from the audience after his lecture. Photo provided

The event was held at Liberty’s Helms School of Government Round Table Room where Sztulman shared with students and faculty members.

Sztulman, whose role is to focus on strengthening the relationship between Israel and the American public, spent time discussing what many public diplomats debate.

“(With) all the people that deal with public diplomacy and international relations, there is one question that is a big fight between all professors and all practitioners too,” Sztulman said. “‘How much does mass communications have an effect on foreign policy?’”

He described two different schools of thought people identify with when answering such a question — the school of priming and the school of framing.

Sztulman said the first line of thought, the school of priming, is exemplified by the lack of information about the Kurds in Syria in the media.

“Mass communications has the power of taking the issue that you don’t talk about and just because (they deal) with the issue, it becomes prime because you talk about it,”Sztulman said.

Sztulman went into more detail about the school of framing, providing multiple examples of how Israel is portrayed.

“Mass communication has the power not only to take an issue and bring it (to public attention), like the priming people say, but also frame it in reality,” Sztulman said. “Things are different when you look from different sides. There is also visual framing that can be different.”

He shared a story of how a Spanish newspaper headline said, “Bush alarmed, Sharon is preparing the extermination of the Palestine people” followed by a photo of a recent bombing. George W. Bush was the U.S. president at the time and Ariel Sharon was the Israeli prime minister. After reading the headline, it seems that the dead bodies are Palestinians, but the caption reads that the bomb attack was located in the Israeli city of Jerusalem.

“When you frame differently, the reality that you get as a spectator is completely, completely different,” Sztulman said.

Sztulman, who was a major in the Israel Defense Forces, said Israel is mostly portrayed in the media only when there is a war or there are bomb attacks. However, he said that is not how Israel should be portrayed. Since the Israeli independence war close to 70 years ago, there have been 24,000 cases of violent deaths. He compared that to São Paulo, Brazil, which has 35,000 violent deaths a year.

“I claim that Israel is given a wrong interpretation of the reality that happens … by the whole media,” Sztulman said.