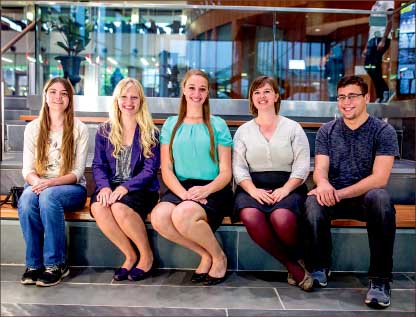 Liberty students and residents of Roanoke peacefully protest for pro-life

On a pale gray, rainy Saturday morning, a rusted red Toyota turned into the parking lot of the Reid Jones Jr. Reproductive Health and Education Center in Roanoke, Virginia. The car came to an abrupt stop, and pulled up to the side of the lot to let someone out.

A woman stepped out of the car. She slammed the car door and walked briskly across the parking lot to the entrance of the health center, a central Virginia Planned Parenthood affiliate. A few feet away from the door, the woman stopped and looked over her shoulder.

There, a group of Liberty students and Roanoke community members stood in the rain participating in pro-life inspired peaceful protest and prayer, which participants call sidewalk counseling.

The woman paused to look at the crowd. This was different; not a lot of people care to give much attention to the group of sidewalk counselors. Through the voices of members calling out “We love and care for you,” the woman swiftly opened the door and walked inside. Silence echoed across the group with the click of the door.

Pats on the back, hugs and prayers between sidewalk counselors are the norm after a woman steps inside the Planned Parenthood in Roanoke; Saturday is the day abortions are performed.

Lifeline, Liberty University’s pro-life ministry and club, has been dedicated to sidewalk counseling at the Planned Parenthood in Roanoke since before veteran members of the club can remember. Though the Lifeline club holds a number of events throughout the year, sidewalk counseling has become a staple in the club’s agenda — it happens every Saturday.

Members participating hold signs in protest, pray for women considering an abortion and give out brochures with advice for those entering and exiting the building. Women going in receive a pamphlet of alternate options to abortion. Women coming out get a brochure with post-abortion resources.

“Sidewalk counseling is a tangible way that we can help to end abortion,” Lifeline President Rachel Brown and Liberty senior said. “It’s a great way to be active in the effort, and although it breaks you emotionally, it draws you closer to God in the end.”

“It’s a hard thing to do,” Lifeline Secretary and Liberty senior Mary Boyette said. “No part of me wants to get up early and stand outside an abortion clinic, but I care about the women that go in there. Sidewalk counseling makes you realize these women (are) real; they’re not just a statistic.”

A part of the challenge is getting a chance to talk to the women entering the clinic. Sidewalk counselors are forced to stand on a medium between the parking lot of the Planned Parenthood and the road, as the parking lot is considered private property.

Rick Sink, a recent Liberty graduate and former Lifeline president who still participates in sidewalk counseling, said that the distance seriously hinders the group’s ability to influence women considering an abortion. At one point, clinic workers parked their cars to block the view of the sidewalk counselors.

“We don’t get a lot of people walking up to talk to us,” Sink said. “Most people seem to ignore us, but if we are able to influence the choice of just one person, then it makes all the difference.”

To several members of Lifeline, it is hard to see much change on a short-term scale from sidewalk counseling. The group strives to plant the seeds, to try to influence the choices of those considering an abortion through love and grace, even if they do not see the impact of their actions in the near future.

“In some cases we’ve seen women leave here without getting an abortion, and we know from national statistics that some women aren’t showing up to their appointments with Planned Parenthood,” Boyette said. “So in a broader sense, there really is an impact to sidewalk counseling.

Visible change or not, members of Lifeline have a shared commitment to sidewalk counseling. Though members do not spend their Saturdays expecting to see changed minds around every corner, Brown said that it is still important to act, and that anyone who considers themselves as pro-life has a duty to come out and support.

To find out more about sidewalk counseling and the Lifeline club, you can e-mail them at lifeline@liberty.edu or check out their Facebook page at
facebook.com/lulifeline.

YOUNG is a feature reporter.