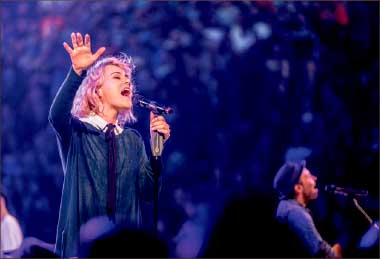 Daniel Bolton, director of Spiritual Programs, said the Hillsong Convocation planning had been in the works for several months.

“We have been building up to this point,” Bolton said. “First we had Christine Caine, then we had Carl Lentz, and that led up to … Hillsong with Brian Houston. … In a sense, this was one of the biggest Convocations we have ever had because of impact (and) influence.”

Hillsong began the service with worship by singing its famous song “Cornerstone,” and later on, the room filled with whispers of excitement as the band began playing the introduction for its song “Oceans.”

David Nasser, senior vice president for spiritual development, introduced Houston to the stage, where Houston immediately made a comment about his own Australian accent.

“I hope you can understand my accent,” Houston said. “You need to, because in heaven everyone speaks like this.”

He then joked around with the crowd saying that people in America say he sounds like Bruce, the shark from “Finding Nemo.”

Houston then put the joking aside and dove into his message about dreams.

“I am a huge believer in what God can do with a dream, a dream inspired by the Holy Spirit,” Houston said.

The senior pastor said that since he was young, he wanted to be in ministry and start a church. From his experiences fulfilling his dream, Houston said he believes everyone is on Earth for a God-given purpose. 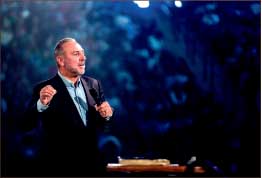 The message transitioned to the story of Joseph in the book of Genesis and how Joseph kept dreaming despite difficult circumstances.

Houston said even though the enemy will always try to stop people from dreaming, dreamers must never give up when their dream is promised by God.

“It is when dreams are gone that potential perishes,” Houston said.

Houston said there will be distractions by the enemy, but he believes the conviction of the Holy Spirit is present to keep Christians on course.

Houston prayed for the students as the band returned to the stage and sang a closing song.

Bolton said this Convocation was like a dream come true.

“It is not every Convocation that you get the best worship and the best speaking,” Bolton said.

According to Bolton, the planning to have Hillsong come to Convocation was more difficult because of the time difference in Australia.

“We would be working on it at 11 p.m., midnight and 1 a.m. because that was the best time for them to start working in Sydney,” Bolton said.

Bolton said Hillsong decided to come to Liberty on their only off day since they started their tour. The group’s next stop was the Hillsong Conference in New York City.

“They chose to spend their off day with us, which is a pretty cool thing, and it says a lot about Liberty students and … how Convocation is making a name for itself,” Bolton said. “We have had a lot of different people report back to Houston and Hillsong saying ‘Yeah, (Liberty) is an incredible place.’ We expect to have them back.”

FOLEY is the asst. news editor.