At every level, whether little league or professional, a coach’s job is to support, encourage, and teach their athletes not only the skills necessary to excel in a given sport but to instill character and witness the growth of an athlete physically, mentally and spiritually. In sports, just like life, adversity occurs whether in an injury, failure, illness or loss. Athletes are taught from their coaches that these setbacks build character. 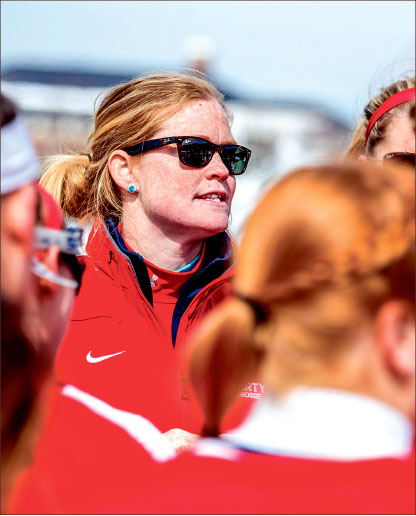 Fighting back — Kelly Nangle uses her bout with cancer to inspire and motivate her team. Liberty University News Service

Kelly Nangle, the head women’s lacrosse coach at Liberty University, understands the difficulties associated with adversity from her battle with cancer. Yet through it all, she still displays selflessness, strength and love. Nangle uses the adversity in her life as an opportunity to glorify God and teach her team of 32 young women life lessons.

During Nangle’s first year as head coach at Liberty, she battled stage one cervical cancer, receiving weekly shots with low dosages of chemotherapy for 10 weeks.

Later in the season, the doctors discovered a more severe cancer in the lymph nodes under her arm. This led to further treatments of higher and more intense dosages
of chemotherapy.

Although Nangle was fighting for her health during this time, she said the entire process was a mere “annoyance” since she wanted to spend all her time, energy, and effort on her team and not herself.

“I don’t think I took any time to digest any of it because we were in the middle of the season,” Nangle said. “My life gets put completely on hold during the season because I don’t care about anything else.”

To make matters worse, the team’s record during Nangle’s first season with the Flames was 2-16.

“My first year was so hard because we weren’t winning and nothing was clicking, and we couldn’t figure out how to get everyone on the same page,” Nangle said. “And on top of that I felt (awful).”

Even though the season did not result in wins, it produced something more lasting — a family unified for one cause.

“I think the team is everything to Nangle, the girls are basically her family,” Assistant Coach Meghan Harkey said. “We’re all her family and the people that she turns to. The girls and their well-being are everything to her.”

There seemed to be a unanimous consensus from the team about Nangle’s heart and passion for not only the sport of lacrosse but for each individual’s growth and success both on and off the field.

“Obviously I love what I do, but I love doing it in this capacity at the college level because it’s that age from 18 to 22 where there’s so much going on,” Nangle said. “I love sports, so I could sit and think about different drills that we’re going to do, but that’s just a piece of it. You have kids go through so much in the time you’re with them, and it’s really rewarding to come alongside them and go through it with them.”

Nangle’s love for others around her flows from her selfless and strong mentality.

“She is an example of selflessness and strength, putting other people before herself, and loving on other people even though she probably needed to be loved on more,” senior Megan Hammond said. “In those ways, I think she shows us God’s love.”

The countless stories and examples shared by Nangle’s players is a testimony of her leadership ability and unconditional love for her girls. Many times she was described as someone who is always in a rush but never rushing, fully investing herself in whatever she does.

“I have always viewed her as strong because at practice one time she was mad at us for not working hard enough and giving our best so she jumped in the drill and proved us all to be lazy because she outdid our efforts,” senior Kelly Belue said. “Obviously her body was weaker than ours but she showed strength. She showed us whatever we put in we will get out of it.”

Nangle had her lymph node removed in the summer of 2014 and is currently in a cycle of getting her body back to a healthy condition. Her immune system is still low.

Although that first season did not necessarily go according to plan with only two victories, it did not diminish the lacrosse team’s spirit and morale. They unified together for a cause: to promote cancer awareness and demonstrate their support and love.

According to Dunay, the team wanted to show their support to Nangle, so each member on the team wrote her a note every single day to encourage and show love to her.

According to the players, the unity and team chemistry cultivated during the first year of Nangle’s coaching career at Liberty carried over to the subsequent year, leading the team to the Big South Conference Tournament championship game.

“Without that foundation-builder that we had the first year, we wouldn’t have been able to build upon it the next year,” Nangle said. “That season was a turning point for our team.”

Through it all, Nangle displays humility and gives all the glory and praise back to God for using her at that time for a specific purpose. She also attributes her drive to push forward and overcome because of the young women on the team.

“Without being overly dramatic, they gave me a reason to get out of bed,” Nangle said. “But it helped give me strength because I knew I had to take care of myself and get better for the girls. Part of the purpose for me to go through this was for myself to have support and learning how to lean on people but more importantly to be an example and for the team to see things aren’t going to be perfect, but if we rely on God, we can get through anything.”

Britton is a sports reporter.