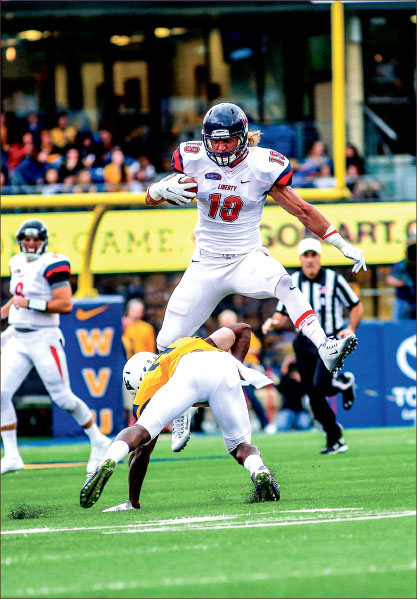 Flames senior kicker John Lunsford banged his fourth kick of the day off the left upright and watched it drop just short. Although the kick was called back for a delay of game on the offense, and Lunsford finally got himself on the board with his next kick, his fourth miss of the day was already burned in his, and everyone else’s mind.

Airborn — Junior tight end Will Johnson, transfer from West Virginia in his second year at Liberty,
catapults over a former teammate in Liberty’s loss to the Mountaineers. Photo credit: Leah Seavers

The West Virginia Mountaineers won the game handily, 41-17, and improved to 2-0 as the Flames dropped to 1-1 in Morgantown.

“(The missed kicks are) the main reason why we have to have touchdowns instead of field goals,” senior quarterback Josh Woodrum said. “We can’t rely on a placekicker to save the game for us or to keep us in the game.”

The Mountaineers opened up the game with a high-tempo offense that marched down the field in less than three minutes, but were forced to kick a field goal after stalling in the red-zone.

On the Flames first drive of the game, they faced a fourth-and-1 at the 50-yard line. Liberty loaded the box and pulled all the WVU defenders into the middle before running the option and pitching to redshirt senior running back Desmond Rice who had nothing but open space in front of him. Rice dropped the pitch and managed to jump on the ball but the Flames turned the ball over on downs. 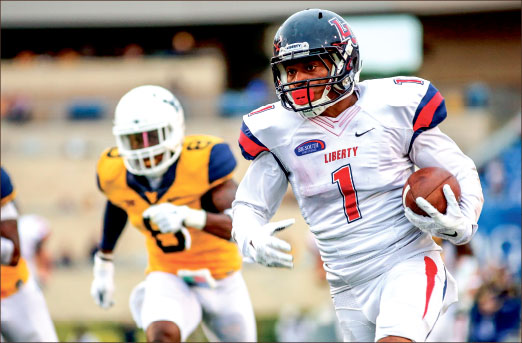 “We had a perfect play call setup,” Woodrum said. “We knew exactly what they were going to do, but we didn’t execute.”

The Mountaineers next drive consisted of a 34-yard scramble by junior quarterback Skyler Howard that got them into the red-zone. Their offense stalled again and settled for a second field goal.

On the next series Liberty drove down to the WVU 29-yard line before having to attempt a field goal on fourth-and-5. Lunsford missed his first field goal of the game, wide right from 46-yards out.

“If we make the field goals, I think the game might be different,” Liberty Head Coach Turner Gill said. “He is capable of making those kicks. Unfortunately, today was not one of his better days.”

West Virginia capitalized on the missed opportunities by the Flames and extended the lead to 13-0 just four minutes later.

The Flames drove 39-yards to the WVU 36-yard line on the next drive but again faltered in West Virginia territory and were forced to attempt a field goal.

“We would make big plays all the way down there, and then we would miss simple plays and have mental errors down there,” Woodrum said. “We just (have) to finish.”

Lunsford’s second field goal attempt, this time from 52-yards, missed wide right once again and West Virginia got the ball at its own 36-yard line.

On the next West Virginia drive, a late hit penalty on Flames junior linebacker Dexter Robbins extended the drive in the red-zone and allowed West Virginia to eventually score a touchdown to make the score 20-0.

Lunsford attempted his third field goal of the game on the next Liberty drive and missed wide left from 31-yards out. West Virginia would miss a 54-yard field goal as the half expired.

“If you take those three field goals that we missed and turn them into touchdowns, we are right in that game,” Woodrum said.

The second half saw West Virginia score another touchdown before the Flames finally got on the board to make it 27-7 with a touchdown from sophomore running back Todd Macon. The Mountaineers answered back with a touchdown less than two minutes later, and Lunsford responded with his first and only made field goal of the game from 49-yards out early in the fourth quarter.

Both teams scored one more touchdown apiece as the final score was 41-17 in favor of the Mountaineers.

“Obviously West Virginia was a better team,” Gill said. “We are going to learn from this game. We are going to move forward. I expect our guys to be ready to play next week.”

One of the things the Flames knew they had to focus on was not turning the ball over like they did in 2014 at North Carolina, and minimizing penalties.

“We definitely improved in that area as far as not turning the ball over,” Gill said. “It was good to see our guys take care of the ball.”

The Flames finished the game with no turnovers, less penalties than WVU and more time of possession.

“You would’ve thought in that sort of situation we would have ended up winning,” Woodrum said.

The Flames will play Saturday, Sept. 19 at home against No. 8 Montana before embarking on a four game road trip.

“We’ll bounce back,” Woodrum said. “We’ll be better from this loss.”

Schmieg is the asst. sports editor.