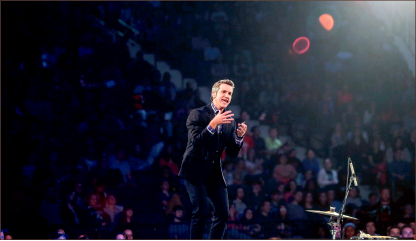 Discussion — Jon Acuff returned to Liberty to teach on his new book “Do Over” in Convocation. Photo credit: Courtney Russo

According to Senior Vice President for Spiritual Development David Nasser, when he and his staff asked for requests concerning Convocation speakers, Acuff and Goff topped the list.

Acuff, who has spoken at Liberty University multiple times, highlighted topics from his new book, “Do Over” Tuesday, April 21 at a book signing held at the Liberty University Bookstore. He elaborated on the book’s theme Wednesday at Convocation.

“Do Over” explains the four inevitable transitions that people experience in the workforce and in life — hitting a ceiling, experiencing a bump, making a jump, and getting a surprise opportunity.

According to Acuff, hitting a ceiling occurs because of a voluntary choice and ends negatively such as working in an unfavorable occupation. A bump is defined as an involuntary and negative occurrence, such as losing a job. The jump happens as a result of a voluntary choice that results in a positive change. Finally, an opportunity occurs when something good happens because of an involuntarily incident, such as a random job opportunity.

In addition, Acuff stressed the importance of being a flexible leader as well as being a student.

“Leaders who can’t be questioned do questionable things,” Acuff said.

Acuff wanted students to be leaders while also being led and to understand they have jurisdiction over how they will react to these changes through evaluating relationships, focusing on skills, building character and practicing hustle in and out of the workplace.

As Goff stressed the importance of love in his message, he also encouraged students to wait.

Goff relayed this statement to the audience because of his recent experience of losing sight in his right eye. After visiting the doctor multiple times, Goff was encouraged to practice patience.
During Convocation, students were influenced to wait on God and know that God is good even through the rough and confusing patches in life.

Goff’s other pieces of advice included loving the people that are hard to understand, holding people close especially in times of need, quitting things and clearing up time for spontaneity.
“We need to live an interrupted life,” Goff said.

Goff reasoned that people should leave their schedules open and be available to people more often as opposed to stuffing their days with activities and hoarding their time and their possessions.

Following love’s lead, never listening to the voice of comparison, and staying humble and childlike, but not childish, were some of his other points as he spoke to the Liberty community.

“You want to go change the world — go be you — the humblest you,” Goff said.

Ritter is a news reporter.

Tiller is the feature editor.