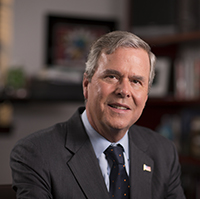 Jeb Bush, 62, was elected as Florida’s 43rd governor in 1998, serving two terms from 1999-2007. He is the first two-term Republican to hold the position of governor in Florida.
“Liberty University is honored to welcome Gov. Jeb Bush to campus for our 42nd commencement exercises,” President Jerry Falwell said. “Throughout his years of public service, Gov. Bush has been a champion for excellence in education and so many other issues of vital importance to our university community.”
During his time as governor, Jeb Bush was well known for his education reform. Recently, he is known for his support of Common Core. Jeb Bush also campaigns for comprehensive immigration reform, and he is a strong gun rights advocate.

The former Florida governor announced Dec. 16, 2014, he would “actively explore” a run for president, though there is no specific timeline for an official announcement. Jeb Bush formed a leadership political action committee Jan. 6, 2015.

Jeb Bush graduated from the University of Texas at Austin with a degree in Latin American affairs and served as Florida’s Secretary of Commerce before being elected governor.

Commencement will take place in Williams Stadium at 10 a.m. Saturday, May 9.