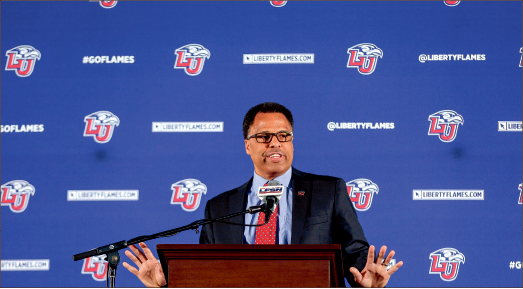 The month-long coaching search came to a conclusion Wednesday, April 1 at a press conference held in Williams Stadium, where Barber made the announcement.

McKay coached the Flames from 2007 to 2009, when he resigned and headed to Charlottesville, Virginia, to join Virginia Head Coach Tony Bennett.

According to Barber, he interviewed nine different coaches — seven head coaches and two assistant coaches. Once all the interviews were conducted, Barber said he knew exactly whom he wanted to take over the basketball program.

“There was no question in my mind that the right coach for Liberty (is) Ritchie McKay,” Barber said.

Barber said he reached out to McKay as soon as he had the chance. Barber further acknowledged that the new head coach has proven himself as a Christian, coach and recruiter, three key components Barber wanted in a coach.

Barber, along with Liberty President Jerry Falwell, introduced McKay to an audience composed of fans, faculty and media, who gave a standing ovation when McKay took to the stage. The basketball team was also in attendance.

“The biggest first step (to changing to the direction of the program) is getting to know the players,” McKay said. “I want to get to know them as people.”
This announcement was primarily important to the team. Soon after their early exit in the 2015 Big South Tournament, the players found out that former coach Dale Layer would not return. The news hit them hard, especially junior forward Theo Johnson.

“We all took (Layer’s firing) rather tough,” Johnson said. “He’s such a good dude. Off the court, he teaches (us) so much. … He’s kind of like a father figure, in a way,
especially for me.”

Junior guard Joe Retic expounded on Johnson’s claim that the team was unsettled in seeing its coach depart. Retic also said they eventually had to “move on.”

Approximately one month later, the team welcomed the new coach and could not be more excited.

According to Johnson, he’s not the only Flame excited about the hire.

“I think everybody feels like we just feels like we got a new life,” Johnson said. “There’s a new person, a new coaching style, a new system … everything is just new.”

“I like (McKay) personally because he’s really a ‘no nonsense’ kind of guy,” Johnson said. “He’s really genuine. When he says something, he’s not just saying it
to say it.”

With McKay’s team set, he recently compiled his new coaching staff. Omar Mance and Matt Olinger are the two remaining members, while Kyle Getter and Brad Soucie were brought in from outside schools.

Barber and the Flames believe McKay is the right man for this position, and so does McKay.

“I’m competitive,” McKay said. “For those of you that know me, I want to win, but I want to win the right way. And I know that there’s a process to that.”

According to Barber, McKay signed a five-year contract for an undisclosed amount.