As a Bostonian, I choose life for Tsarnaev 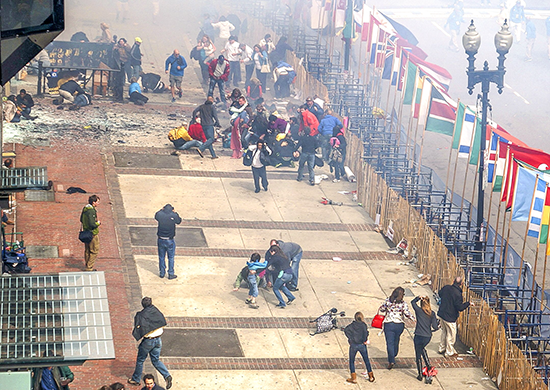 Horror — Dzhokhar Tsarnaev caused this much pain and destruction two years ago. What sort of punishment can bring justice to Tsarnaev and his victims, their families and society at large? Google Images, public domain

With the conviction of surviving Boston Marathon bomber Dzhokhar Tsarnaev, the trial moves on to the phase we have been debating for exactly two years now: what is the appropriate punishment for someone guilty of this kind of atrocity? More deeply, what constitutes justice, and how should it be carried out in this particular case?

In his book “Grand Strategies: Literature, Statecraft, and World Order,” Yale professor and former U.S. diplomat Charles Hill called the death penalty “the foundation stone of civilization.” Government is a contract between the people that exchanges the old way of clans and blood feuds for a new system founded on order and the rule of law, he argued.

“For only when a victim’s kin are convinced that the state will enact justice in response to murder will they entrust that power to the state,” Hill wrote. “…John Locke would later make clear the foundational importance of this compact. The rights that individuals cede to the state are revocable if the government fails to perform the responsibilities entrusted to it. But the right to punish under the law is not revocable, but ‘wholly given up.’”

So how can most Bostonians, myself included, oppose the death penalty for Tsarnaev? Because we rightly distinguish between the concepts of “justice” and “judgment.”

Plato debated the nature of justice nearly 2,500 years ago in a book now known as “The Republic.” In it, his mentor Socrates spends hours dismantling common definitions of justice before eventually arriving at the following idea: justice is to the state what health is to the body — every part properly fulfilling its designated role. It is a very Greek idea that emphasizes a life of balance, temperance, virtue and wisdom.

This is important to keep in mind, because this is exactly why most of us from “the Athens of America” want Tsarnaev to get life in prison. We pride ourselves on setting our emotions aside and choosing what we believe to be the most rational course of action — we favor law and order over the blood feud.

There are three primary reasons I want to see Tsarnaev spend the next 60-70 years in a federal Supermax, and the first is closure. If the jury votes to put him away for life, that will be the end of it. He will disappear into solitary confinement in a tiny concrete cell, never to show his face in public again.

The death penalty, on the other hand, takes years to enact, during which time he can repeatedly appeal and force everyone to relive the events of April 15, 2013 over and over again. Rather than honoring the anniversary of the marathon bombing with a sense of finality, we will have this unfinished business hanging over our heads, postponing further healing.

Secondly, if we execute Tsarnaev in his early 20s, we merely answer death with death and provide little payment for the lives of an eight-year-old boy, two young women and a police officer. Forcing him to live out a miserable existence with no friends, loved ones or any real meaning would essentially take his life while leaving him in a position to experience the full magnitude of that loss. He may not feel any remorse now, but I believe that would change over the course of an entire lifetime.

Finally, as a Muslim and a Christian respectively, Tsarnaev and I both believe in some kind of afterlife and that our decisions have eternal consequences. Both sides of that equation demand serious consideration. While he may fear dying, he is almost certainly looking forward to the transition from whatever miserable existence he currently has into his idea of paradise. Why give him the satisfaction? Is that not essentially giving him the martyrdom he supposedly desires?

Conversely, regardless of his evil actions, Tsarnaev is still a human being. Christians of all people should place the most value on life and not rush to send a person to eternity too quickly. Yes, he made his choices and deserves to pay for them, but there is at least the tiniest chance that he may come to terms with his creator in the next 70 years. He certainly showed no mercy to Martin Richard, Krystle Campbell, Lingzi Lu, Sean Collier or the hundreds of people he wounded, but the concept of eternity ought to at least give us pause.

In 1924, legendary defense attorney Clarence Darrow gave an impassioned speech to spare the lives of two college students convicted of the “crime of the century” — murdering a teenage boy simply to prove they could commit the “perfect crime.” He contended that death would accomplish little, but mercy would affect both the two young men and the society that elected to spare their lives.

“The easy thing and the popular thing to do is to hang my clients. I know it. … Your Honor stands between the past and the future. You may hang these boys; you may hang them by the neck until they are dead. But in doing it you will turn your face toward the past,” Darrow argued. “I am pleading for the future; I am pleading for a time when hatred and cruelty will not control the hearts of men. When we can learn by reason and judgment and understanding and faith that all life is worth saving, and that mercy is the highest attribute of man.”

Darrow’s “masterful plea” saved the lives of his clients, and it is worth considering nearly a century later. To me, the death penalty is most important because it places the tool of execution back in the hands of the people, through a representative jury. This gives us all a chance to take a sober look and say, “No, it is enough. Let ‘the shedding of blood be stopped.’”

Boston Globe columnist Kevin Cullen correctly noted that, “If the guilt phase of the trial was about Dzhokhar Tsarnaev, the penalty phase which will begin next week is about us.”

While I acknowledge the valid concerns of death penalty proponents, I personally choose to step back in this case and choose mercy over judgment. For as the Apostle James wrote in chapter two verses 12-13, “So speak and so act as those who are to be judged under the law of liberty. For judgment is without mercy to one who has shown no mercy. Mercy triumphs over judgment.”