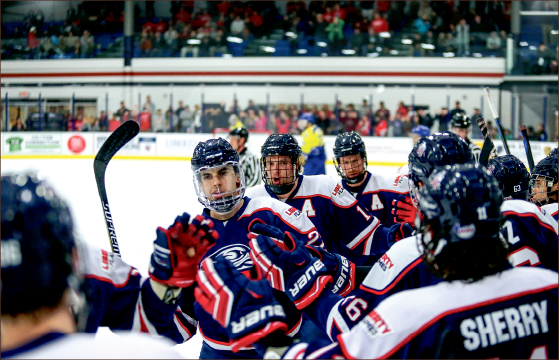 It seemed an unfortunately fitting ending to an inconsistent season. On a team comprised of more than one-third new players and riddled with injuries all season long, the team was proud of its accomplishments and the foundation it laid for the season to come.

“Overall it was a good year,” Head Coach Kirk Handy said. “I’m most proud of our guys this year for not giving up and eventually checking out. It would have been really easy when we didn’t know who would play goalie next game, or who (was) going to play with who on a line because of the injuries we had on the back end and on our front end. Give our guys a lot of credit. They were able to find ways to overcome obstacles that were put in front of them.”

Handy named the Flames depth their greatest on-ice strength moving forward, with four lines consistently contributing to the offensive cause and a diverse, experienced group of defensemen patrolling the blue line.

When healthy, the Flames executed their system and consistently saw wins as a result. Handy pointed to the West Virginia series and, in particular, the Minot State University series.

The Flames will be tested by the departure of graduating seniors Matt Sherry, Lindsay LeBlanc, Ryley Egan, Cam Bakker, Christian Garland and Ryan Kerr, as well as Cary Byron and Ian Harris, Liberty division II (DII) and division III (DIII) goalies who joined the team midseason after their DI counterparts went down with injuries.

Handy called LeBlanc “night in and night out one of the fiercest competitors,” naming LeBlanc and Egan as two of the team’s key scorers. He also called Kerr and Garland the “heart and soul” of the penalty kill unit and “unsung heroes of the team.” Handy mourned the loss of leadership and a defensive anchor in Sherry, and he called Bakker “an all-around dominant defenseman.” He expressed his gratitude for Harris and Byron stepping up to carry the team when needed.

“It’s an excellent senior class, and I think we’re going to have a tough time replacing them,” Handy said.

The good news is that while the seniors leave behind big skates to fill, the rising senior class and freshmen such as alternate captains Luke Hannon and Ben Hughes, among others, already seem to fit nicely.

“We had a meeting last week and I was able to talk to Luke and Ben and the senior class and cast a bit of a vision for them on the start of next year and what we want out of them,” Handy said. “But I have no doubt they’re going to be big and really take ownership for us next year.”

It was a bittersweet season to be sure, but the Flames are already gearing up for a deeper run at nationals next season.

Rush is a sports reporter.