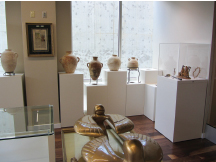 After years of being hidden in the back of DeMoss Hall, the Center for Judaic Studies (CJS) has been moved to the Jerry Falwell Library, allowing students easier access. History — Artifacts from the museum in the library. Photo credit: Charae McQueen

“I believe it was an astute move and am so glad the Center for Judaic Studies has moved into a strategic location,” Dr. A. F. Mickahall, an adjunct professor with a Ph.D. in Jewish Studies, said. “This new location gives the center greater visibility to all students, families, faculty and other guests who visit, tour or conduct research in the library.”

According to Dr. J. Randall Price, the executive director for the Center of Judaic Studies, the move was a decision made by the administration due to construction and renovations to make room in DeMoss Hall for the School of Education.

“DeMoss wasn’t as accessible,” Price said. “(The move) gives us an opportunity now for people who come to the library — students, faculty, classes and the public — to have access to the new Liberty Biblical Museum, which is part of our center.”

The Liberty Biblical Museum is filled with ancient artifacts and antiques that Price and his associates have spent the last 30 years collecting. The purpose of the museum is to give visitors a glimpse of the Jewish lifestyle and culture from 2,000-4,000 years ago.

“We go through the biblical periods, starting with the time of Abraham all the way through the time of Jesus, with special displays of pottery and weapons and coins and daily life and many things like that,” Price said. “The point is to understand about who the Jewish people are, why God chose them, and what they have to offer us — the biblical remembering of what God did in history.”

Price said that, although the move was made at the end of May, construction troubles delayed CJS from getting truly settled. He said the artifacts for the Liberty Biblical Museum might not be fully unpacked and placed until near the end of the semester.

“We bring in speakers twice a year, people who either are Jewish or Holocaust survivors, and present the Passover to create awareness to have a point of contact with the student body,” Price said. “I would like to see more of that, to be able to have the ability to bring in more high-profile people.”

Price believes it is important for people to learn more about Jewish history in order to better understand the politics and principles involved with modern-day Israel and to respect the Jewish people.

“The early church was made up of Jewish people,” Price said. “Their Bible was the Hebrew Old Testament that we use. For the first hundred years or more, the church was primarily Jewish, and we forget that. We had Jewish roots to our faith. The Jewish people still have God’s promise for the future. Those things have not changed. We live in a time in which the church is somewhat confused on that.”

The CJS is open to the public Monday-Thursday, 9 a.m. – 4:30 p.m. Friday visiting times are managed by appointment only.

JANNEY is the asst. news editor.